The Expanding Role of Folates and Fluoropyrimidines in Cancer Chemotherapy 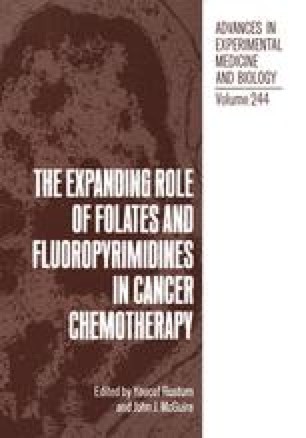 I would like to make a few comments about the earliest talks in the day. The later talks in the day concentrated on TS and the effects of dUMP, FdUMP, and various factors related to TS. What the earlier talks point out is that there is a real need to be looking at earlier steps. The transport of CF, for example, and the activation reaction, both have to be considered. As Dave Duch pointed out, for example, his particular cell line seems to be unable to be modulated because it does not activate CF and that could potentially be a mechanism of intrinsic resistance to this kind of modulation phenomenon and I think that should be looked at in more detail. In terms of the transport, the pharmacokinetic data show the 6R-isomer remains at very high levels in the plasma as the natural isomer falls, so that ratio becomes very high. There needs to be more work in looking at the effects of the 6R-isomer and Dr. Rustum, in fact, is interested in doing some of those studies as are some other groups. In terms of the activation, there were two pathways described and I think most people seem to think that the methenyltetrahydrofolate synthetase is the one primarily responsible for the effect of CF in these combinations, but the other pathway has not been ruled out yet. An interesting aspect to examine is whether both of those pathways are important or only one of them. In terms of a basic biochemical question, at least two groups reported the normal occurrence of 5-formyltetrahydrofolate which had previously been thought to be an artifact of isolation procedures. Since we don’t have a reaction that uses 5-formyltetrahydrofolate I think it would be interesting to determine the function of that pool. A storage role was postulated, but the levels are very low; it seems that if you were going to store something you’d store higher levels than the minor amount that was reported. The transport and the activation, the steps prior to TS, deserve more investigation.

Public Health Minor Amount Cancer Chemotherapy Interesting Aspect Pharmacokinetic Data
These keywords were added by machine and not by the authors. This process is experimental and the keywords may be updated as the learning algorithm improves.
Download to read the full chapter text