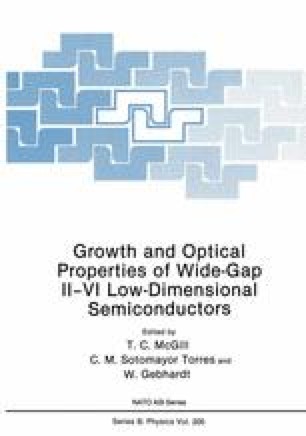 Several methods exist to grow wide gap II–VI semiconductor materials by molecular beam epitaxy (MBE). For instance, in the case of ZnSe growth one can use either a single source loaded with the compound, or one can use two sources loaded with the elements. An advantage of the latter set-up is that the flux ratio of the elements impinging on the substrate can be varied more freely. In a sense an extreme case is when only one element at a time is admitted to the substrate, which is referred to as the atomic layer epitaxy (ALE) mode. In ALE of ZnSe one cycles through two phases: in each phase enough atoms of one constituent are allowed to impinge on the substrate to reach one full monolayer coverage. Excess atoms are assumed to reevaporate, which seems plausible in view of the high vapor pressure of the elements. Sometimes a pause between the two phases is introduced. Several groups1–2 have reported good results in growing ZnSe and ZnTe using this ALE growth mode, for instance, the thickness of the layers is simply determined by the number of shutter cycles. Other advantages of ALE may lie in selective dopant incorporation and in possibilities to lower the growth temperature while maintaining good crystal growth. Finally it has to be remarked that the growth rate during ALE is an order of magnitude less than during MBE, which may be disadvantageous because of higher impurity incorporation, but on the other hand may be beneficial for the crystal growth. We have previously reported on the growth of ZnSe/ZnSxSe1-xsuperlattices by MBE,3,4 and in the present paper we report on a brief study of the growth and properties of ZnSe/ZnSxSe1-x superlattices in which the ZnSe is grown by ALE.

Molecular Beam Epitaxy Atomic Layer Epitaxy Superlattice Layer Layer Pair ZnSe Buffer Layer
These keywords were added by machine and not by the authors. This process is experimental and the keywords may be updated as the learning algorithm improves.
This is a preview of subscription content, log in to check access.