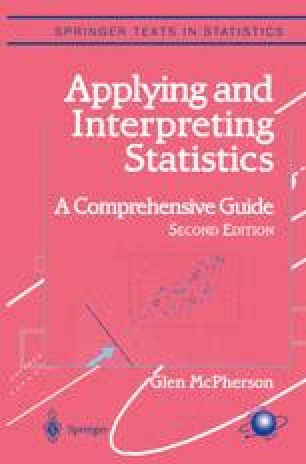 Prediction and Estimation: The Role of Explanatory Variables

One of the important roles of statistical analysis is the study of variation in data collected on a response variable with the aim of relating some of that variation to changes in associated explanatory variables. The models and methodology of Chapter 15 concentrate on situations where the response variable is a scaled variable and the explanatory variables are categorical, defining groups or treatments, and with the aim of establishing whether there is a difference in mean response among groups or under different treatments. Chapter 16 covers the same territory, but for categorical response variables.

Explanatory Variable Trend Line Linear Regression Equation Standardize Residual Regression Relation
These keywords were added by machine and not by the authors. This process is experimental and the keywords may be updated as the learning algorithm improves.
This is a preview of subscription content, log in to check access.