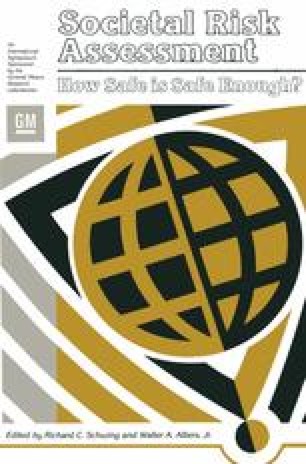 Ethics, Economics and the Value of Safety

Economists view private risk as a commodity — riskier jobs receive higher wages to compensate workers for voluntarily accepting job related risks of death. In the economist’s view, it is then a simple task to determine a money-risk trade-off derived from the job market and apply this trade-off in making decisions on social or public risks (as opposed to private risks). However, whereas private risks are typically compensated (payment is made a priori to accept risk), social or public risks are typically uncompensated. This distinction, compensated versus uncompensated risks, has long been observed, but in terms of a parallel terminology, voluntary versus involuntary risks. Society seems much more averse to the latter as opposed to the former. Economics as a behavioral science does not provide any clues as to this distinction. However, ethics, or rather the study of ethical systems, does provide a rationale for distinguishing between compensated and uncompensated risks. In this paper, four ethical systems — Utilitarian, Nietzschean, Rawlsian, and Libertarian — are examined as they apply to the question of the right or wrong of imposing or accepting risks. The conclusion of this analysis is that all of the four ethical systems examined accept compensated risks but reject uncompensated risks under at least some circumstances. The technical implication for economic analysis is that if any of these four ethical systems are used to construct a social welfare function, that function may imply lexicographic social preferences between public and private safety.

Marginal Utility Public Safety Social Welfare Function Safety Program Ethical System
These keywords were added by machine and not by the authors. This process is experimental and the keywords may be updated as the learning algorithm improves.

This paper is drawn in great part from Chapter Two of “A Study of Ethical Issues in Benefit Cost Analysis,” by Shaul Ben-David, Allen Kneese and William D. Schulze. This study was funded in part by the National Science Foundation Program in Ethics and Values in Science and Technology. Additional support in risk assessment for the author has been obtained from Los Alamos Scientific Laboratory and from Resources for the Future. Thanks go to Douglas McClean, David Brookshire, Todd Sandler, Mark Thayer and Bruce Forster for helpful comments. All opinions, conclusions and errors are, of course, the sole responsibility of the author.