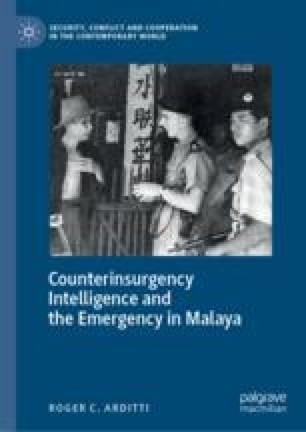 This chapter provides a brief overview of the Malayan Emergency. It places the Emergency in the broader historiological context, particularly in relation to the key “stale-mate” and “continuity” interpretations of how the counter-insurgency campaign evolved. It then considers how historians have previously assessed the role of intelligence within the Emergency, which revolves predominantly around Special Branch. The chapter then defines the various other elements of the intelligence apparatus during the Emergency, which have been thus far largely ignored. This includes the Joint Intelligence Committee (Far East), Security Intelligence Far East, the Malayan Security Service, and various forms of military intelligence. Finally, the chapter outlines the thesis of the book: that the development of an effective counter-insurgency intelligence was far more complicated, broad, and uncertain than previously acknowledged.