The 2018 Yearbook of the Digital Ethics Lab 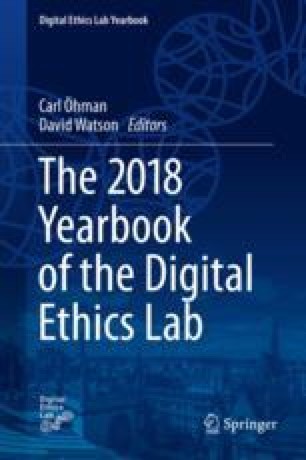 The Green and the Blue: Naïve Ideas to Improve Politics in a Mature Information Society

In this chapter, I present some ideas that I hope may help improve political thinking and practice in a mature information society. The ambition is quintessentially philosophical: trying to understand and improve the world, to the extent that each of us can contribute, in this case with some intellectual work. That is all. It is not a little, I realize, but it is not much either. It is the usual paradox: how important is a vote, or, in this case, a conceptual contribution? As much as a grain of sand on the beach: one counts for nothing, two are still nothing, but millions of grains can make a significant difference, if only because, without them, the beach would not exist. This is the relational value of aggregation. The ambition is therefore philosophical, but also aggregative, because I hope that the ideas expressed in this chapter may be useful and find some follow-up.

This text is a revised and updated version of a pamphlet that I published in March 2018 in Italian with the title “Il Verde e il Blu—Idee ingenue per migliorare la politica in una società matura dell’informazione” (Rome: Formiche). The project was begun in 2016, after Brexit and before the election of Trump and the huge success of two populist parties (the Northern League and the Five Star Movement) in the Italian general election of 2018. The idea of this text took its initial form during some meetings with Alessandro Beulcke, with whom I conceived the project, discussed its contents, and shared the enthusiasm for the value that an informed, rational, intelligent, and open dialogue may have to improve politics. Without Alessandro, I would probably never have had the courage or the confidence to embark on this project. So, I consider him co-responsible, but only of the good bits, the rest is my fault. The support by Allea, Alessandro’s communication company, was crucial for the logistics side.

Besides Alessandro, several people helped me to improve the ideas contained in this chapter in a profound way. They did it with a lot of patience, kindness, intelligence, and a remarkable investment of time. I really do not know how to thank them. For privacy reasons I will not name all of them. But I will nominate a group (which I have sometimes called G 18:3, with reference to Matthew 18:3) which has contributed to various versions of this text in a critical way, in addition to Alessandro himself: Alessandro Aleotti, Monica Beltrametti, Barbara Carfagna, Luca De Biase, Adrio Maria de Carolis, Massimo Durante, Ugo Pagallo, and Sergio Scalpelli. In addition, I would also like to thank Fabrizio Floridi, Kia Nobre, Stefano Quintarelli, and Mariarosaria Taddeo, who have read many versions and provided more suggestions on how to improve them than I can remember. Finally, David Sutcliffe commented and edited the English version with so much acumen that it became a new edition. To all these people, named or not, goes my deep gratitude. If the things I wrote in this text are not entirely wrong, it is thanks to our discussions and the feedback I have received from them. None of the people mentioned is responsible for the errors that remain, which are only mine, and I mean it. And above all, none of the people who helped me have approved or subscribed to the ideas presented here, and for which I take full responsibility.