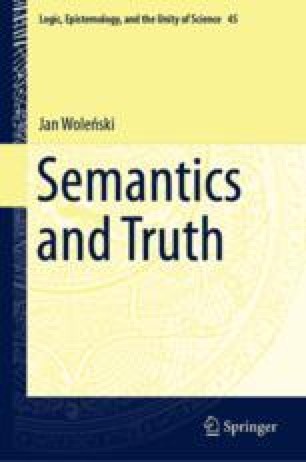 Chapter
Part of the Logic, Epistemology, and the Unity of Science book series (LEUS, volume 45)

Since STT is a logical theory, its relation to logic are very close. The task of this chapter consists in presenting logical concepts and theories relevant for the further discussion of STT. Particular sections are devoted to propositional calculus, first-order logic, metalogic, definitions of logic (the universality of logic is its essential attribute) and historical notes on metalogic and metamathematics.

Appendix A: Historical Note About Metalogic and Metamathematics

Alexander of Aphrodisias, an Aristotelian scholar ordered the works of the Stagirite in such a way that those of Aristotle’s works devoted to first philosophy (prote filosofia) were placed just after the book Physics. Thus, the word ‘metaphysics’ (more precisely, its Greek counterpart) arose as a composition of ‘meta’ (after) and ‘physics’, and originally meant the same as the phrase ‘after physics’. This origin of the word ‘metaphysics’ has no particular substantial import and indicates its role in, so to speak, librarians work. However, some historians of ancient philosophy suggest that our word was intentionally introduced to point out considerations of a certain kind, namely reflections about nature and its theory. At any rate, this more substantial use of the word ‘metaphysics’ quickly became the official. Today, metaphysics is considered as the theory of being, and is very often identified with ontology; eventually, ontology is understood as general metaphysics, that is, the study of the most general properties of being qua being.

The use of words beginning with the prefix ‘meta’ became quite popular in the 20th century. One can cite ‘metatheory’, ‘metascience’, ‘metaethics’, ‘metamathematics’ or ‘metalogic’ as examples. Their intended meaning consists in pointing out considerations about the fields indicated following the prefix ‘meta’. The word ‘metaphysics’ would be a very good label for methodology of physics, but this use of it is excluded by the historical circumstances mentioned above—independently of whether they occurred accidentally or not. The label ‘metatheory’ denotes, or perhaps suggests, a theory of theories. Metascientific studies in the 20th century employed the term ‘metatheory’ to refer to investigations of theories in a variety of disciplines, for example, logic, sociology, psychology, history, etc.—some people claim that these investigations constitute a separate field, namely science of science. The philosophers of the Vienna Circle, who made metatheoretical studies of science the main concern of their philosophy, restricted metatheory to the logic of science modelled on developments in the foundations of mathematics. More specifically, the logic of science was intended to play a role similar to metamathematics in Hilberts’s understanding that is, it was just projected as a formal analysis of scientific theories understood as well-defined linguistic entities.

The word ‘metamathematics’ was also used before Hilbert, but with a different meaning. In the early 19th century, mathematicians, like Gauss, spoke about metamathematics in an explicitly pejorative sense. It was for them a speculative way of looking at mathematics—something like the metaphysics of mathematics. A negative attitude toward metaphysics was inherited at that time from Kant and early German positivists. The only one serious use of ‘metamathematics’ was restricted to so-called metageometry. This was due to the fact that the invention of various geometries in the 19th century stimulated comparative studies. For example, investigations were undertaken of particular axiomatizations, their mutual relations, models of various geometrical systems, and attempts to prove their consistency. In this context, the word ‘metageometry’ referred to a well-established domain of formal studies. Presently, the prefix ‘meta’ means two different things. First, it indicates that metatheoretical considerations appear after (in the genetic sense) the theories that comprise the subject-matter of such studies have been formulated. Secondly, this prefix suggests that every metatheory is somehow above a theory which is investigated. It is important to see that ‘above’ does not function as an evaluation, but only indicates the fact that metatheories operate on a different level than theories do. A simple mark of this fact is that theories are formulated in an object–language, whereas metatheories are expressed in a related metalanguage.

Since metalogic is a part of metamathematics, it is useful to say a few words about the latter. It is probably not accidental that Hilbert passed to metamathematics through his famous study of geometry and its axiomatic foundations. Following metageometry, Hilbert projected metamathematics as a rigorous study of mathematical theories by mathematical methods. Moreover, the Hilbertian metamathematics, due to his views in the philosophy of mathematics (formalism) was restricted to finitary methods. If we reject this limitation, metamathematics can be described as the study of mathematical systems by all mathematical methods; they cover those that are admitted in ordinary mathematics, including infinitistic or infinitary; the latter freely employ, for instance, the axiom of choice or transfinite induction. However, this description is still too narrow. Hilbert’s position in metamathematics can be described as follows: only syntactic or combinatorial methods are admissible in metatheoretical studies. When the Hilbertians proved theorems with semantic content about formal systems, they used semantic concepts, like validity or truth, in informal sense rather than as rigorously defined notions. Due to Tarski’s works, semantics became a rigorous mathematical field and entered the domain of metamathematics (see Feferman 2004). It is perhaps interesting that the borderline between syntax and semantics corresponds to some extent to the frontier between finitary and infinitary methods. I say “to some extent” because we also have formal systems with infinitely long formulas (infinitary logic). It is clear that the syntax of infinitary logics must be investigated by methods that exceed beyond finitary tools. It was also not accidental that systematic formal semantics (model theory), which requires infinitistic methods, appeared in works of Tarski, who—due to the scientific ideology of the Polish mathematical school—did not accept the view (the finitary dogma, so to speak) that only finite methods are admissible in metamathematics (the finitary dogma, so to speak). Today, metamathematics can be divided into three wide areas: proof theory, recursion theory and model theory. Roughly speaking, the first is an extension of Hilbert’s position because the above-mentioned finitistic restriction is rejected. Recursion theory is closely related to the decision problem, that is, the problem of the existence of combinatorial (algorithmic) procedures that provide methods for deciding whether a given formula is or not is a theorem. Finally, model theory, studies relations between formal systems and the structures which are their interpretations and realizations; this part of metamathematics has many affinities with universal algebra.

Metalogic is understood here as that part of metamathematics which is restricted to logical systems, and refers to studies of logical systems by mathematical methods. Of course, the scope of metalogic depends on the range of the concept of logic. For example, if FOT is accepted, the metalogic proper to this assumption should be restricted to the metatheory of FOL. The word ‘metalogic’ also appeared in the 19th century, although its roots go back to the Middle Ages (Metalogicus of John of Salisbury). Philosophers, mainly Neokantians, understood metalogic as concerned with general considerations about logic, its nature, scope, relations to other fields, etc. The term ‘metalogic’ in its modern sense, that is, referring to mathematical studies on logic, was used for the first time in Poland as a label for the metamathematics of the propositional calculus. Thus, metalogic is metamathematics restricted to logic, and it covers proof theory, investigations concerning the decidability problem, and model theory with respect to logic.

(DG19) Let me mention as curiosities from the present point of view that Ernest Troeltsch, an eminent German historian, used the term ‘metalogic’as referring to methods of concrete historical investigations, and Walter Harburger—as equivalent to ‘logic of music’.►