Spain and the Wider World since 2000 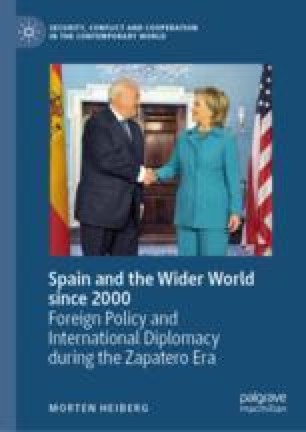 Alliance or Clash of Civilizations?

This chapter disentangles the mystery surrounding the murder of Rafic Hariri, the former Lebanese prime minister, in 2005. It is also within this context of political upheaval in North Africa and the Middle East that the book discusses the much-debated Spanish-UN initiative “Alliance of Civilizations,” which was coined as “naïve” by its critics, yet nevertheless seen by the Zapatero government as crucial to preventing terrorism. Whereas the government was essentially focused on the long-term significance of the UN alliance to Spanish domestic security, some influential Spanish foreign policy advisors rather conceived the Alliance within the broader context of an evolving multi-polarity and pluralism in the international environment which would inevitably change the global relationship of force to the detriment of US hegemony.