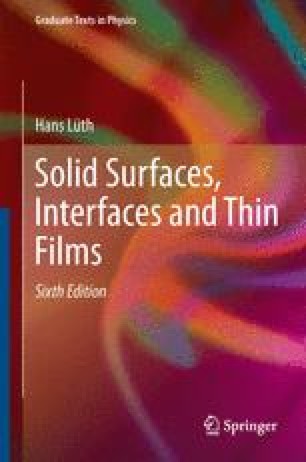 The interaction of atoms and molecules with solid surfaces is discussed within the framework of physisorption and chemisorption. Hereby also the description of chemisorption processes in terms of multidimensional potential hypersurfaces obtained from density functional theory (DFT) is briefly presented. Work function changes induced by adsorption as well as two-dimensional phase transitions in adsorbate layers are explained. A whole section is devoted to the description of adsorption kinetics with emphasis on the phenomenology of adsorption, desorption and the corresponding isotherms. As important characterisation techniques Kelvin probe and photoemission measurements as well as desorption methods are discussed.

Work Function High Occupy Molecular Orbital Lower Unoccupied Molecular Orbital Desorption Rate Adsorbed Atom
These keywords were added by machine and not by the authors. This process is experimental and the keywords may be updated as the learning algorithm improves.
This is a preview of subscription content, log in to check access. 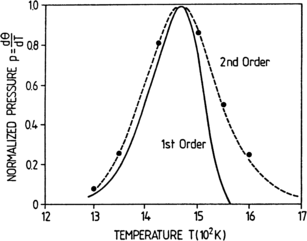 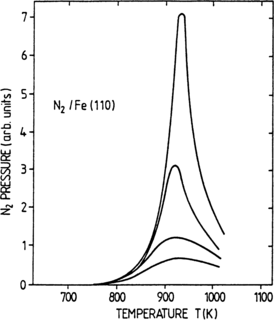 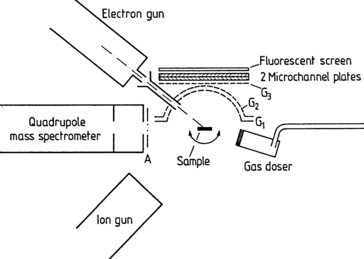 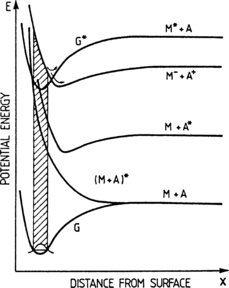 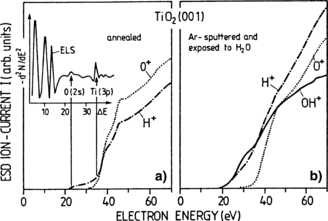 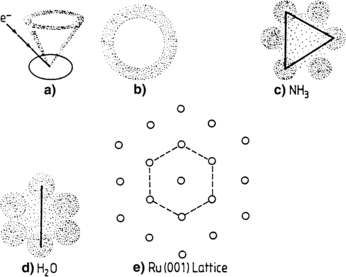 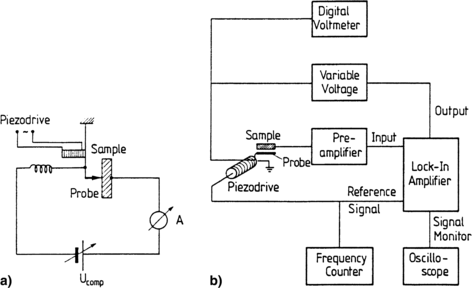 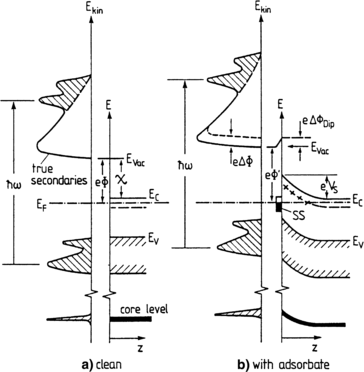 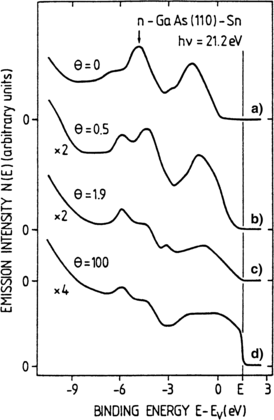 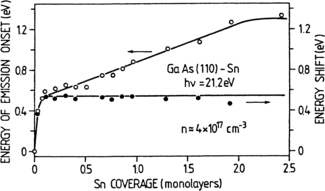 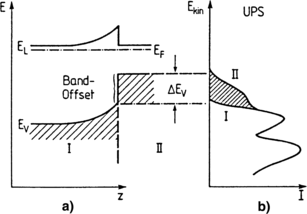 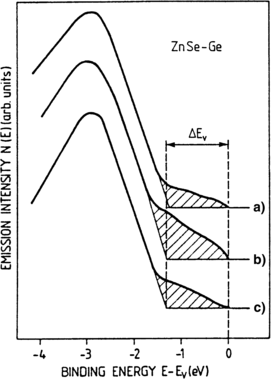 Much essential information about adsorption processes and surface chemical reactions is derived from desorption experiments. The entire class of desorption techniques has the common feature that a clean surface under UHV conditions is exposed to a well-defined gas atmosphere or a molecular beam. Subsequent desorption of the resultant adsorbate is performed by thermal annealing of the surface or by irradiating with light or energetic particles. The desorbing species can be analysed mass-spectroscopically or the particle beam can be optically imaged on a screen to yield information about possible anisotropy in the angular distribution of the desorbing atoms or molecules.

Panel XVIII: Kelvin-Probe and Photoemission Measurements for the Study of Work-Function Changes and Semiconductor Interfaces

The adsorption of atoms or molecules on a solid surface, i.e. the first steps of the formation of a solid–solid interface, is generally associated with a change of work function (Sect. 10.3), and on semiconductors also with a change in band bending (because of the formation of new interface states). These effects can be studied in situ both by photoemission spectroscopy (UPS and XPS; Sect.  6.3) and by Kelvin-probe measurements. The latter technique, in particular, is useful for work-function measurements on metal surfaces, where space-charge layer effects are negligible (spatial extension of some Ångstroms).

Kelvin probes for the determination of work-function changes consist of an electrode (usually point-like) which can be positioned in front of the surface being studied (Fig. XVIII.1(a)). This counterelectrode is driven electromagnetically by a solenoid or by piezoceramics such that it vibrates with frequency ω against the sample surface. Sample and vibrating electrode are connected electrically through an ammeter (A) and a battery which allows a variable biasing (U comp).

For semiconductor surfaces a knowledge of the work-function change eΔϕ=eϕ′−eϕ due to adsorption does not give direct insight into atomic properties. The work-function change contains contributions due to band-bending changes and in addition a surface dipole contribution which may be described as a change of the electron affinity χ. These two contributions can be determined separately in a photoemission experiment with UV light (UPS) or X-ray excitation (XPS). According to Fig. XVIII.2 an adsorption process giving rise to extrinsic Surface States (SS) in the gap and thus an upwards band bending (depletion layer) causes the work function eϕ to change into
$$ e\phi^{\prime} = e\phi+ eV_{\mathrm{S}} + e\Delta \phi_{\mathrm{Dip}}, $$
(XVIII.7)
where V S is the band bending (change in Fig. XVIII.2); eΔϕ Dip is a dipole contribution arising from the elemental dipoles of the adsorbed molecules or atoms (Δ) and may also include a change of the electron affinity \(\Delta\tilde{\chi}\) due to a surface reconstruction during adsorption
$$ e\Delta\phi_{\mathrm{Dip}} = \Delta+ \Delta\tilde{\chi}. $$
(XVIII.8)
The distinction between Δ and \(\Delta\tilde{\chi}\) is rather arbitrary and can be avoided by using a single change of the electron affinity Δχ, such that the change in the work function due to adsorption is given as in (10.17a), (10.17b).

Figure XVIII.2 is a schematic drawing of a photoemission experiment (UPS) in which electrons are emitted from occupied valence band states (of density given by shaded area) by irradiation with photons of energy ħω and detected with a kinetic energy E kin. The detected spectral distribution (also shaded) thus resembles the density of occupied states, but is superimposed on a background of true secondaries, which have undergone several inelastic processes on their way from the point of excitation to the solid surface. Since the probing depth in such an experiment is only a couple of Ångstroms (Sect.  6.3), small in comparison with the thickness of the space charge layer, the measured electron distribution yields information about the electronic band structure at the very surface. In the experiment the Fermi energy E F is the general reference point (chemical potential of electrically connected sample and analyser) and all measured energies are related to this. E F is usually determined at the end of the different measurements by evaporating a metal film onto the sample surface and determining the high energy onset of emission which, on a metal surface, is given by E F.

As is evident from Fig. XVIII.2 a change of work function eΔϕ=eϕ′−eϕ is directly detected as a change of the energy width of the entire spectral distribution of the emitted electrons. The exact position of the low energy flank of the true secondaries with respect to the experimentally determined position of E F gives the absolute values of the work functions eϕ with and without adsorbate present. In principle, both the work-function and the band-bending changes due to adsorption can be separately determined. The high-energy flank of the distribution of emitted electrons corresponds to the upper valence-band maximum (for normal emission). A shift of this flank due to adsorption indicates a shift of the valence-band edge with respect to the Fermi level and thus a band-bending change ΔV S (or V S for initially flat bands as in Fig. XVIII.2). This is only true if the adsorption process produces no new surface states in the gap. Such extrinsic gap states would modify the spectral distribution at the high-energy flank and the determination of any shift of the onset would be impossible. A second possibility for determining a band-bending change is via a characteristic emission band that is clearly recognized as due to bulk states (rather than surface states, Sect.  6.3.3). If this spectral band does not change its shape significantly upon adsorption (due to new surface states in the neighborhood), its position can be determined with sufficient accuracy on the clean surface and after adsorption. An observed shift gives direct information about the band bending change (Fig. XVIII.2). For example, the adsorption of metallic Sn on GaAs(110) surfaces has been studied by UPS in order to gain information about the Schottky-barrier formation (Fig. XVIII.3). The emission band near 4.7 eV binding energy (marked by an arrow) shifts to lower binding energy (i.e., towards the Fermi level E F) with increasing Sn coverage as does the emission onset corresponding to the upper valence band edge. This indicates an upwards band-bending change, i.e., the formation of a depletion layer on n-type material. A quantitative evaluation of the band bending is not possible from the shift of the emission onset since new metal-induced surface states cause a strong deformation of the spectrum. This is clearly seen from the plot in Fig. XVIII.4. The information about the band bending change must be extracted from the energetic position of the bulk emission band (filled circles).

A similar procedure for investigating band-bending changes upon adsorption can also be performed by XPS on core-level emission bands, since these shift in the same way as valence states (Fig. XVIII.2). Standard XPS equipment, however, does not usually offer sufficient energy resolution, and so optical monochromators are needed. Furthermore, severe problems in the analysis of the data can occur when chemical bonding shifts (Sect.  6.3) are superimposed on the band-bending shifts.

Photoemission spectroscopy, in particular UPS, also yields the most direct way to measure band offsets (discontinuities) (Sect.  8.1) in situ between different epitaxy steps. The principle of the method is explained in Fig. XVIII.5. On the same energy scale one plots the band structure of an uncompleted semiconductor heterostructure (a) together with the corresponding (kinetic) energy distribution of the emitted electrons (b). In an ideal case the clean surface spectrum of semiconductor I shows an emission onset which indicates the energetic position of its upper valence band maximum. After growing one or two monolayers of semiconductor II, a new shoulder appears whose emission onset characterizes the upper valence-band edge of semiconductor II. The difference between the two thresholds is simply the valence-band discontinuity. It is clear that this technique only works when the valence-band edge of semiconductor II occurs at energies higher than that of semiconductor I.
Furthermore, the measurement can only be made on epilayers of thicknesses up to a couple of Ångstroms (information depth of UPS); but this is usually sufficient to allow the complete development of the band structure of semiconductor II. The method is illustrated in Fig. XVIII.6 for Ge overlayers on a ZnSe substrate [XVIII.2]. The energy of the new emission onset due to the Ge overlayer is insensitive to the crystallographic order of the Ge. An amorphous film exhibits the same band discontinuity as two other Ge overlayers which have been annealed and are crystalline.

In general, it should be emphasized that photoemission techniques give quite direct information about band-bending changes, work function and band discontinuities; but the accuracy in determining the absolute values is typically between 20 and 100 meV. This is usually inadequate for narrow gap semiconductor such as InSb or InAs, in particular for explaining the electronic properties of interfaces.

A cesium ion (Cs+) has an ionic radius of 3 Å. Calculate the approximate surface dipole moment for a (Cs+) ion adsorbed on a tungsten (W) surface and discuss the result with respect to the observed work-function changes for Cs-adsorption on a W surface (Fig. 10.12).

At 300 K, gas molecules have a sticking coefficient of S=0.1 on a freshly prepared, clean semiconductor surface. The adsorption is thermally activated with a sticking coefficient S∝exp(−E act/kT) and an activation energy per molecule of E act=0.1 eV. How high are the adsorbate coverages after a one hour exposure at 300 K and at 70 K, respectively? Are the adsorbate coverages detectable by Auger Electron Spectroscopy (AES)?