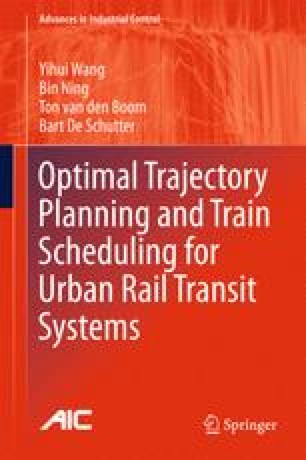 Urban rail traffic plays a key role in public transportation since it combines high transport capacity and high efficiency. More specifically, a safe, fast, punctual, energy-efficient, and comfortable railway system is important for the economic, environmental, and social objectives of a country or a city. The main focus of this book is on saving energy in railway operations and on enhancing the passenger satisfaction, which can be achieved via optimal trajectory planning for trains and passenger demand-oriented train scheduling by utilizing several mathematical tools and programming methods like MILP, SQP, etc. In this chapter, we provide a brief introduction to railway operations and then present the structure of this book.

Rail Transit Railway System Train Control Train Schedule Urban Rail Transit
These keywords were added by machine and not by the authors. This process is experimental and the keywords may be updated as the learning algorithm improves.
This is a preview of subscription content, log in to check access.