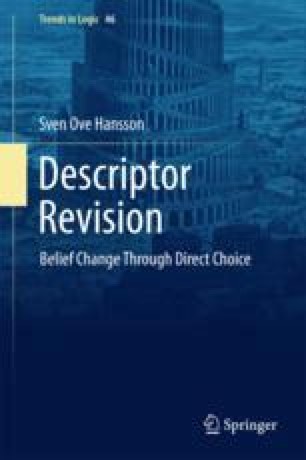 The standard operation of contraction (\(\div \)) is assumed to satisfy the inclusion postulate (\(K\div p\subseteq K\)), according to which nothing new is added to the belief set (K) when a sentence (p) is contracted. However, inclusion is not a particularly credible postulate. Although many belief changes have the purpose to give up a certain belief, such changes tend to be generated by some new information that is then also added to the belief set. This is a good reason to investigate the wider category of operations of revocation, i.e. operations in which a specified sentence is removed in a process that may possibly also involve the addition of some new information to the belief set. In descriptor revision, revocation can be obtained with the defining formula Open image in new window

. Some classes of such operations are constructed, and it is shown how the properties of the derived operation of revocation Open image in new window

depend on those of the underlying descriptor revision (\(\circ \)). Another major topic in this chapter is relations of entrenchment. Such relations are usually associated with AGM contraction, but they are also applicable to revocation. They can be constructed from proximity relations on descriptors (Chapter  5). Entrenchment relations can be applied not only to sentences, but also to sets of sentences. These extended entrenchment relations are studied in connection with operations of multiple revocation, in which a set of sentences rather than a single sentence is removed. Finally, the alternative approach of “revisionary revocation” is introduced. Its basic idea is that the revocation of a sentence p takes the form of revision by some sentence Open image in new window

that can be interpreted as saying that there are sufficient reasons not to believe in p.