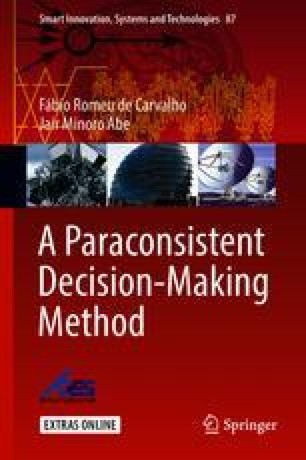 An Overview of More Applications

Annotated logics have shown fruitful in many aspects. An overview of more applications of such logical systems are discussed in this chapter. Annotated logics has a well-defined syntactical counterpart as well as a semantic which the logic is sound and complete (when the associated lattice is finite; otherwise is still an open problem). Their composition as 2- sorted logic in which one variable has a mathematical structure (lattice) has allowed a smooth hardware implementation as well as logical programming.

We begin with the paraconsistent logic programming language—ParaLog

In da Costa et al. [95], Abe et al. [99] it was developed a paraconsistent logic programming language—Paralog. As it is well known, the development of computationally efficient programs in it should exploit the following two aspects in its language:

However, it is not always an easy task to conciliate both aspects. Therefore, programs to be implemented in Paralog should be well defined to evidence both the declarative aspect and the procedural side of the language.

It must be pointed out that programs in Paralog, like programs in standard Prolog, may be easily understood or reduced—when well defined—using addition or elimination of clauses, respectively.

A small knowledge base in the domain of Medicine is presented as a Paralog program. The development of this small knowledge base was subsidized by the information provided by three experts in Medicine. The first two specialists—clinicians—provided six1 diagnosis rules for two diseases: disease1 and disease2. The last specialist—a pathologist—provided information on four symptoms: symptom1, symptom2, symptom3 and symptom4.

A small knowledge base in Medicine implemented in Paralog
In this example, several types of queries can be performed. Table 10.1 below shows some query types, the evidences provided as answers by the Paralog inference engine and their respective meaning.
Table 10.1

Query and answer forms in Paralog

The knowledge base of Example 10.1 implemented in standard Prolog

In this example, several types of queries can be performed as well. Table 10.3 shows some query types provided as answers by the standard Prolog and their respective meaning.

Starting from Examples 10.1 and 10.2 it can be seen that there are different characteristics between implementing and consulting in Paralog and standard Prolog. Among these features, the most important are:

In Example 10.1, Paralog program presents a four-valued evidence representation. However, the information loss may be greater for a standard Prolog program, if the facts and rules of Paralog use the intermediate evidence of lattice τ = {x ∈ ℜ| 0 ≤ x ≤ 1} × {x ∈ ℜ| 0 ≤ x ≤ 1}. This last characteristic may be observed in the Table 10.2. The Table 10.2 shows five queries and answers, presented and obtained both in Paralog and standard Prolog program.
Table 10.2

The answers obtained from the two approaches present major differences. That is, to the first query: “Does Bill have diseasel?”, Paralog answers that the information on Bill’s disease1 is unknown, while the standard Prolog enters into a loop. This happens because the standard Prolog inference engine depends on the ordination of facts and rules to reach deductions. This, for standard Prolog to be able to deduct an answer similar to Paralog, the facts and rules in Example 10.2 should be reordered. On the other hand, as the Paralog inference engine does not depend on reordering facts and rules, such reordering becomes unnecessary.

In the second query: “Does Bill have disease2?”, Paralog answers that “Bill has disease2”, while the standard Prolog enters into a loop. This happens for the same reasons explained in the foregoing item.

In the third query: “Does John have diseasel?”, Paralog answers that the information on John’s diseasel is inconsistent, while the standard Prolog answers that “John has diseasel”. This happens because the standard Prolog inference engine, after reaching a conclusion that “John has diseasel” does not check whether there are other conclusions leading to a contraction. On the other hand, Paralog performs such check, leading to more appropriate conclusions.

In the fourth query: “Does John have disease2?”, Paralog answers that the information on John’s disease2 is inconsistent while the standard Prolog answers that “John has disease2”. This happens for the same reasons explained in the preceding item.

In the last query: “Does Bob have diseasel”, Paralog e answers that the information on Bob’s diseasel is unknown, while the standard Prolog answers that “Bob does not have diseasel”. This happens because the standard Prolog inference engine does not distinguish the two possible interpretations for the answer not. On the other hand, the Paralog inference engine, being based on an infinitely valued paraconsistent evidential logic, allows the distinction to be made.

In view of the above, it is shown that the use of the Paralog language may handle several Computer Science questions more naturally.

The Paracontrol is the eletric-eletronic materialization of the Para-analyzer algorithm Da Silva Filho [99], which is basically an electronic circuit, which treats logical signals in a context of logic Eτ. Such circuit compares logical values and determines domains of a state lattice corresponding to the output value. Favorable evidence and contrary evidence degrees are represented by a voltage. Certainty and Uncertainty degrees are set by analogues of operational amplifiers. The Paracontrol comprises both analogue and digital systems, and it can be externally adjusted by applying positive and negative voltages. The Paracontrol was tested in real-life experiments with an autonomous mobile robot Emmy, whose favorable/contrary evidences coincide with the values of ultrasonic sensors and distances are represented by continuous values of voltage (Fig. 10.1).

While moving in a non-structured environment the robot Emmy gets information about presence/absence of obstacles using the sonar system called Parasonic Abe and Da Silva Filho [03]. The Parasonic can detect obstacles in an autonomous mobile robot’s path by transforming the distances to the obstacle into electric signals of the continuous voltage ranging from 0 to 5 volts. The Parasonic is basically composed of two ultrasonic sensors of type POLAROID 6500 controlled by an 8051 microcontroller. The 8051 is programmed to carry out synchronization between the measurements of the two sensors and the transformation of the distance into electric voltage. Emmy has suffered improvements, and the 2nd prototype is described in what follows.

The robot Emmy uses the paracontrol system to traffic in non-structured environments avoiding collisions with human beings, objects, walls, tables, etc. The form of reception of information on the obstacles is named non-contact which is the method to obtain and to treat signals from ultra-sonic sensors or optical to avoid collisions.

The system of the robot’s control is composed of the Para-sonic, Para-control and supporting circuits. See Fig. 10.2.

As the project is built in hardware besides the paracontrol it was necessary the installation of components for supporting circuits allowing the resulting signals of the paraconsistent analysis to be addressed and indirectly transformed into action.

In this first prototype of the robot Emmy, it was necessary a coder and a decoder such that the referring signals to the logical states resultants of the paraconsistent analysis had its processing made by a microprocessor of 4 inputs and 4 outputs (Fig. 10.3).

The first robot was dubbed Emmy (in homage to the mathematician Amalie Emmy Noether (1882–1935)) (Abe and Da Silva Filho 2003). Also, it was built a robot based on software using Paralog before mentioned, which was dubbed Sofya (in homage to the mathematician Sofya Vasil’evna Kovalevskaya (=Kowalewskaja) (1850–1891)). Then several other prototypes were made with many improvements. Such robots can deal directly with conflicting and/or paracomplete signals (Torres 2010).

Paraconsistent Artificial Neural Networks—PANN is a new artificial neural network introduced in Da Silva Filho and Abe [01]. Its basis leans on paraconsistent annotated logic Eτ Abe [92], also discussed in another chapter of this book. Roughly speaking, the logic Eτ is a logic that allows contradictions and paracompleteness without trivialization. Also, it is possible to manipulate imprecise concepts in its interior.

Multi-agents systems are an important topic in AI. The use of modal systems for modelling knowledge and belief has been widely considered in Artificial Intelligence. One interesting approach is due (Fagin et al. 1995).

Nevertheless, the most of those proposals use extensions of classical logic or at least part of it, keeping as much as fundamental characteristics of classical logic. When it is taken questions of logical omniscience, one relevant concept that appears is that of contradiction.

The attractiveness of admitting paraconsistency and paracompleteness in the system becomes evident if we observe that some agents can lie or be ignorant about certain propositions: an agent may state both A and ¬A (the negation of A) hold (or that none of A and ¬A hold).

In (Abe and Nakamatsu 2009) it was presented a class of paraconsistent and, in general, paracomplete and non-alethic multimodal systems Jτ which may constitute, for instance, a framework for modelling paraconsistent knowledge.

In (Prado 1996) it was described a specification and prototype of an annotated paraconsistent logic-based architecture, which integrates various computing systems—planners, databases, vision systems, etc.—of a manufacturing cell.

To make possible the use of such logic in complex application domains (intense information input and critical agent response time), as the manufacture cells, it has been necessary to extend and refine the techniques and concepts of the paraconsistent annotated evidential logic programming and the Amalgam’s Knowledge-base.

In Computer Science, a right solution for a given problem many times depends on a good representation. For most Artificial Intelligence applications, the choice of a knowledge representation is even harder, since the criteria for such choice are less clear.

Furthermore, its main feature is not to eliminate contradictions, ab initio.

In (Da Silva Filho and Abe 2001) it is presented digital circuits (logical gates COMPLEMENT, AND, OR) inspired in a class of paraconsistent annotated logics Pτ. These circuits allow “inconsistent” signals in a nontrivial manner in their structure.

Such circuits consist of six states; due to the existence of literal operators to each of them, the underlying logic is functionally complete; it is a many-valued and paraconsistent (at least “semantically”) logic.

The simulations were made at 50 MHz, 1.2 μm, by using the software AIM-SPICE, version 1.5a. Also, it was presented a paraconsistent analyzer module combining several paraconsistent circuits, as well as a circuit that allows to detect inconsistent signals and gives a non-trivial treatment.

As far as we know, these results seem to be pioneering in using the concept of paraconsistency in the theory of electronic circuits. The applications appear to be large in the horizon: it expands the scope of applications where conflicting signals are common, such as in sensor circuits in robotics, industry automation circuits, race signal control in electronic circuits, and many other fields (Abe and Da Silva Filho 1998).

Generally speaking, Artificial Neural Network (ANN) can be described as a computational system consisting of a set of highly interconnected processing elements, called artificial neurons, which process information as a response to external stimuli. An artificial neuron is a simplistic representation that emulates the signal integration and threshold firing behaviour of biological neurons using mathematical structures. ANNs are well suited to tackle problems that human beings are good at solving, like prediction and pattern recognition. ANNs have been applied to several branches, among them, in the medical domain for clinical diagnosis, image analysis and interpretation signal analysis and interpretation, and drug development.

As it can be seen by the previous exposition, the applications of paraconsistent systems have been very fruitful in many aspects, opening new horizons for researching.

The appearance of alternative logics to the classical logic impose us some question to ponder: rationality and logicality coincide? There are in fact logics distinct from classical logic? If there are such alternative logics, there are in consequence distinct rationalities? All these issues occupy philosophers, logicians, scientists in general. Any answer to these questions, we face a true revolution in human thought. A true paradigm is similar like the discovering of the non-Euclidean geometry two centuries ago.