The Philosophers and Mathematics 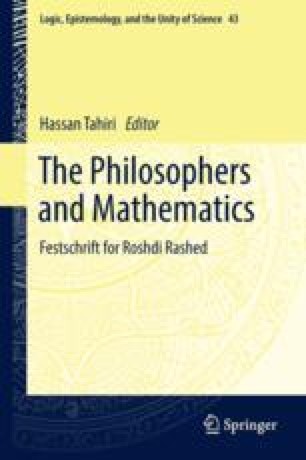 Mathematics and the Physical World in Aristotle

Chapter
Part of the Logic, Epistemology, and the Unity of Science book series (LEUS, volume 43)

I would like to start with a historical question or, more precisely, a question pertaining to the history of science itself. It is a widely accepted idea that Aristotelism has been an obstacle to the emergence of modern physical science, and this was for at least two reasons. The first one is the cognitive role Aristotle is supposed to have attributed to perception. Instead of considering perception as an origin of error (even if this may be the case in exceptional situations, if the perceiving subject is sick for instance), Aristotle thinks that our senses provide us with a reliable image of the external world. The perceptive knowledge is a kind of knowledge in its own right, and the theoretical knowledge is, in fact, the continuation of the perceptive knowledge in some way. The second reason is the presumed inability of the Aristotelian philosophers to apply mathematics to the physical world. This was a formidable obstacle because modern physics came to be but as a mathematical physics. Aristotelianism had therefore to be, so to speak, superseded by the Platonic movement that originated in Florence around Ficino in order to give modern physics the conditions of its appearance. Galileo had to say that “Nature is written with mathematical letters” and Descartes that “our senses do not teach us what things are, but to what extent they are useful or harmful to us”. Alexandre Koyré is right to consider Galilean physics to be basically Platonic. The theoretical justification Aristotle offers for the impossibility of a convergence between mathematics and physics seems to be based on some fundamental features of his philosophy, i.e. he rejects the Platonic conception of a unique science, encompassing all things, and replaces it with the doctrine of the incommunicability of genera, whose corollary is that there is but one science for each genus.

Cite this chapter as:
Pellegrin P. (2018) Mathematics and the Physical World in Aristotle. In: Tahiri H. (eds) The Philosophers and Mathematics. Logic, Epistemology, and the Unity of Science, vol 43. Springer, Cham