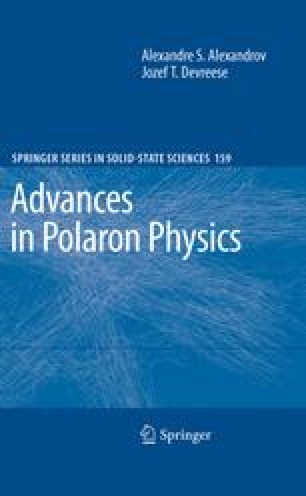 If characteristic phonon frequencies are sufficiently low, the local deformation of ions, caused by electron itself, creates a potential well, which traps the electron even in a perfect crystal lattice. This self-trapping phenomenon was predicted by Landau [10] more than 70 years ago. It was studied in greater detail [11–15] in the effective mass approximation for the electron placed in a continuum polarizable (or deformable) medium, which leads to a so-called large or continuum polaron. Large-polaron wave functions and corresponding lattice distortions spread over many lattice sites. The self-trapping is never complete in the perfect lattice. Due to finite phonon frequencies, ion polarizations can follow polaron motion if the motion is sufficiently slow. Hence, large polarons with a low kinetic energy propagate through the lattice as free electrons but with an enhanced effective mass.

When the polaron binding energy E p is larger than the half-bandwidth, D of the electron band, all states in the Bloch bands are “dressed” by phonons. In this strong-coupling regime, λ = E p/D > 1, the finite bandwidth becomes important, so the continuum approximation cannot be applied. In this case, the carriers are described as smalll or lattice polarons. The main features of small polarons were understood a long time ago [16–22]. The first identification of small polarons in solids was made for nonstoichiometric uranium dioxide in [23, 24]. Large and small polarons were discussed in a number of review papers and textbooks, for example [7, 11, 25–34].

In many models of EPI, the ground-state polaron energy is an analytical function of the coupling constant for any dimensionality of space [35–39]. There is no abrupt (nonanalytical) phase transition of the ground state as the electron–phonon coupling increases. It is instead a crossover from Bloch states of band electrons or large polarons propagating with almost bare mass in a rigid lattice to heavily dressed Bloch states of small polarons propagating at low temperatures with an exponentially enhanced effective mass. The groundstate wave function of any polaron is delocalized for any coupling strength. This result holds for both finite-site models and infinite-site models [38].

Optical Conductivity Small Polaron Monte Carlo Result Large Polaron Optical Conductivity Spectrum
These keywords were added by machine and not by the authors. This process is experimental and the keywords may be updated as the learning algorithm improves.
This is a preview of subscription content, log in to check access.