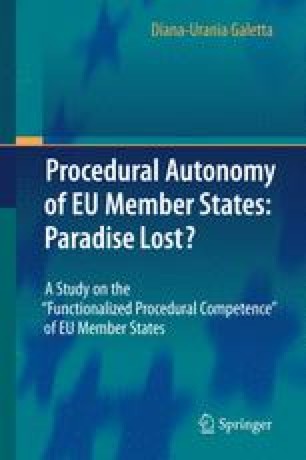 The Jurisprudence of the ECJ on the Procedural Autonomy of Member States: Analysis of the Fundamental Judgements

As already stated in the first Chapter, the chapter that follows consists of an analysis of the ECJ’s decisions, which have been issued as a result of references for a preliminary ruling under Art. 267, TFEU (ex Art. 234, TEC).1 These have been selected because of their specific relevance for the argumentation on the procedural autonomy of the Member States that I wish to outline here. Till now, there are a number of academic works that have considered the issue of the so-called procedural autonomy from the (national or comparative) perspective of national procedural legislations. The aim has been almost always to explain, as thoroughly as possible, all the decisions of the EU judges which have dealt with one or the other aspects of this topic.1 In so doing, however, the authors were almost obliged to choose a classic line of argumentative reasoning, that is, the grouping of the decisions of the ECJ on the basis of the topic of procedural relevance on which these decisions were more or less concentrated: the time limit for submitting an appeal, precautionary protection and so on.

Member State National Court Legal Certainty Preliminary Ruling Consistent Interpretation
These keywords were added by machine and not by the authors. This process is experimental and the keywords may be updated as the learning algorithm improves.
This is a preview of subscription content, log in to check access.