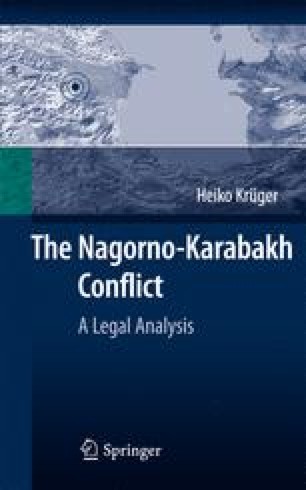 From 1988 onwards, the secession process of Nagorno-Karabakh has been characterised by a high level of violence. What started out as mass demonstrations developed into a civil-war-like situation, paramilitary skirmishes and, at least unofficially, an interstate confrontation. The violent conflict ended in 1994 under a ceasefire agreement. Since that time the conflict is considered as frozen but not resolved. Armenian troops are still stationed in Nagorno-Karabakh and another seven surrounding Azerbaijani administrative districts debarring Azerbaijani authority. Officially the Republic of Armenia denies being a party to the conflict. Instead it claims merely to support the attempts of Armenians living in Nagorno-Karabakh to gain independence. However, this necessarily gives rise to the question of whether Nagorno-Karabakh did in fact prevail against Azerbaijan largely on its own or whether there was any material involvement by Armenia, which would possibly be viewed very critically from an international law perspective. At first sight, only the latter would appear to be the case, since the region of Nagorno- Karabakh regarded itself as economically less developed than the rest of the Azerbaijan SSR. The region would therefore scarcely have been in a position to withstand a full-blown war of secession, force back the official Azerbaijani forces and establish an entity that exists to this day.

Security Council Security Council Resolution Union Republic Draft Article Defence Minister
These keywords were added by machine and not by the authors. This process is experimental and the keywords may be updated as the learning algorithm improves.
This is a preview of subscription content, log in to check access.