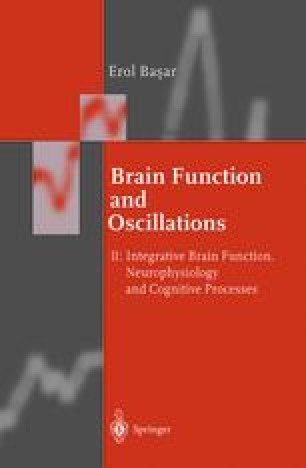 Functional Alphas Selectively Distributed in the Brain - A Theory

It is probably not coincidental that what is known about the EEG alpha rhythm fits rather neatly into a classification scheme similar to Galambos’s scheme for the gamma band (see Chap. 26). Galambos (1992) states:

1. Alpha is more than just a spontaneous rhythm; it is the prototype of spontaneous brain rhythms.

2. Alpha can be induced: Perhaps the reader will find credible the claim that induced alpha-band rhythms are analogues of the gamma-band rhythms induced by moving stripes and odors in the animal experiments. Consider closing eyes in a lighted room: like turning off the lights, it reduces retinal illumination and initiates, or induces, an alpha-band burst in the EEG. An example of alpha-induced (by undefined) changes in internal state: the rhythm disappears the moment a subject follows the instruction “multiply 11 by 13,” and it reappears as soon as the answer is delivered.

3. Alpha can certainly be evoked: Time-locking alpha-like rhythms to onset of light flashes was clearly described by M.A.B. Brazier more than 30 years ago in one of the earliest reports on human computer-averaged responses (Brazier 1960). The physiological basis of this phenomenon - a near-10-Hz periodic oscillation that continues for a second or so - remains unclear (see Mangun (1992) for a summary, Ba§ar, Bullock 1992 eds.). Brazier’s discussion of her discovery has a familiar ring: “This finding of a rhythm phase-locked to stimulus shows that the brain now has a rhythm that has been imposed on it through a sensory system. Has this imposed rhythm supplanted “the endogenous” one; or is it the same rhythm with a shift in phase to carry the message; or is the basic rhythm still there and this one added? In the latter case the brain would have its own rhythm against which to match this one for both frequency and phase” (p. 351).

4. Finally alpha can be emitted: In the study where BMar et al. (1989) demonstrated anticipatory time-locking of gamma-band energy, a well-trained subject emitted time-locked bursts of alphaband energy for up to a full second before the delivery of an expected target. By contrast to the modest evidence they advanced for anticipatory time-locking of waves in the gamma band, the alpha locking to the moment in future when a target will be delivered is robust and highly significant statistically.

Reticular Formation Sensory Stimulation Alpha Activity Gamma Band Alpha Rhythm
These keywords were added by machine and not by the authors. This process is experimental and the keywords may be updated as the learning algorithm improves.

“If one understands the alpha rhythm, he will most probably understand the other EEG phenomena” Storm van Leeuwen (1979)