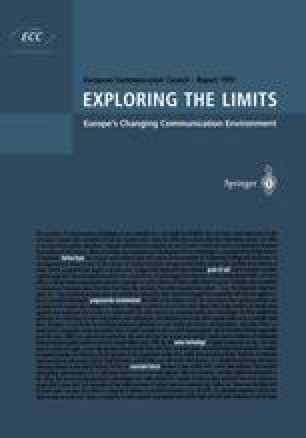 The provision and use of information depends on the political and social structure of a country; Japan s political structure changed to quite an extent after World War II. It showed some continuity in retaining the Emperor and the basic system of a strong central government above 47 departments. But to ensure a democratic process of decision making and to restrict interference of the government with basic rights as intellectual freedom, changes took place within the government. In 1947 the Ministry of Interior was dissolved and its functions distributed among several governmental bodies. In 1949 the Ministry of Communication (established in 1895) was split up into a Ministry of Post and a Ministry of Telecommunication. In 1952 both ministries were merged again (MPT), but at the same time telecommunication business was brought into a separate organisation: NTT (Nippon Telegraph and Telephone) was established as a “public corporation”. And some months later, a separate organisation was established for international telecommunication, KDD (Kokusai Denshin Denwa).

Separate Organisation Broadcasting Satellite Telecommunication Policy Telecommunication Carrier Commercial Broadcaster
These keywords were added by machine and not by the authors. This process is experimental and the keywords may be updated as the learning algorithm improves.

“From the heights of rapid economic growth in the mid-sixties, Japan began to look ahead and made efforts to understand future trends in technology, economy and society. ... From the beginning, there were several views on the Japanese road to the post-industrial society, but they were unified by the term ‘johoka shakai’, coined apparently by Y. Hayashi. Johoka shakai can be translated in many ways, e.g. as ‘informatised society’ or ‘information-oriented society’. Hayashi actually defined the term johoka (‘informatised’) as the important quality of products and services, their ‘appeal’ above their expected functionality.”