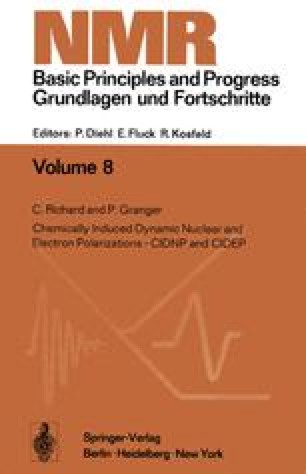 It is well known that photolysis of molecules produces radicals which give an electron spin resonance spectrum (ESR). The theory of this effect may be found elsewhere [1a, 1d, 1i]. As for the CIDNP effect in NMR radical chemical reactions may give rise to a similar effect in ESR spectra. The first observation of this effect [170a, 170b] appeared before CIDNP, but was not developed, and ESR parameters were determined only for the identification of the different radicals. However, the anomalous behavior of the radicals, especially H atoms, was reported. The first work cited as CIDEP was that of Paul and Fischer [170c] who studied the reduction and oxidation of propionic and isobutyric acids.