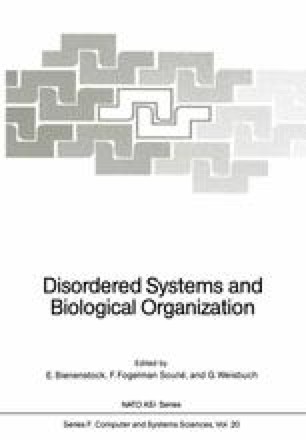 Invariant Cycles in the Random Mapping of N Integers Onto Themselves. Comparison with Kauffman Binary Network

According to Kauffman’s idea [Kauffman 1970a,b, 1979], one considers an ensemble of P genes which may be found in two possible states s., labelled as 0 and 1. An overall state S of the ensemble is the set {s1, s2,…, sp}, which is an element of {0,1}p. Given a mapping of {0,l}p→{0,1}p, the iteration of this mapping defines the dynamics of any initial S. In Kauffman model si at time (t+1) is determined by the states of k genes at time t, -possibly including si itself. Therefore the dynamics is defined by the set of all gene connections and, for each gene, by the data of a Boolean function, that is by an array of 2k elements whose values are either 0 or 1 (there are \( {2^{{{2^k}}}} \) possible Boolean functions). The dynamics drives any S towards a cycle of period m (1 ⩽ m ⩽ 2p), and the problem is to find out the number and the periods of those cycles when S is varied over the various possible states. A numerical study has been performed by Kauffman for k=2 and choosing at random the set of gene connections and the P Boolean functions. It appeared that: This remarkable result shows up some amazing simplicity in the dynamics of a large system and, in particular, helps one to understand how a so large number of interacting genes can produce only few cellular types.

Boolean Function Random Mapping Average Period Successive Image Cellular Type
These keywords were added by machine and not by the authors. This process is experimental and the keywords may be updated as the learning algorithm improves.
This is a preview of subscription content, log in to check access.