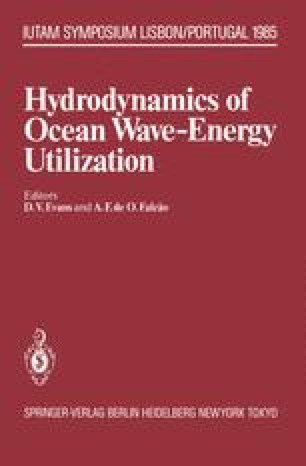 A number of theoretical and experimental papers on ocean wave energy absorption have been presented over the past few years [1]. Many of them are concerned with the characteristics of absorbed wave energy and the condition of optimum control in regular waves. Practically this is not sufficient, and more interest must be focused on the problem in irregular waves. Absorbed wave energy in irregular waves obtained by a generating system which is composed of a floating body and external mechanism has two components, one is a steady component and the other is a fluctuating one. In this paper, some problems about the two components mentioned above are studied. One is the theory of optimum control to obtain the maximum mean energy of irregular waves related to the steady part, and the other is the formulation of the spectrum about absorbed wave energy related to the fluctuating part. The optimum conditions for complete absorption of wave energy in regular waves are well known. However, to establish the system of wave energy absorption in irregular waves, it is necessary to consider the problem on the basis of the time domain analysis, because the optimum conditions depend on wave frequency and irregular waves contain many component waves having different frequencies. A system, in which the incident irregular waves are measured at a certain distance in front of the floating body with the external mechanism, is controlled instantaneously to improve the efficiency by using the measured wave data, called “Feedforward Control System for Wave Energy Absorption” is proposed. Furthermore, the law of causation in the characteristics of wave propagation is discussed from the view point of practical approach, because the kernel function of wave propagation, which is used in this system, does not usually satisfy the law of causation.

Wave Energy Regular Wave Ship Motion Time Domain Analysis Irregular Wave
These keywords were added by machine and not by the authors. This process is experimental and the keywords may be updated as the learning algorithm improves.
This is a preview of subscription content, log in to check access.