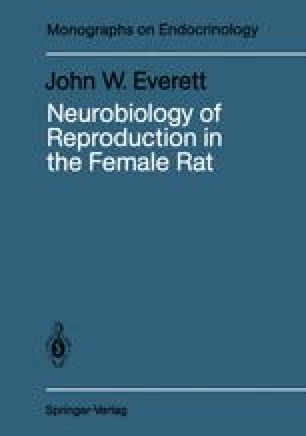 Steroid Regulation of the Ovarian Cycle

The inhibitory chronic effects of gonadal secretions on pituitary gonadotropic function were recognized several years before the synthetic steroids became available (cf. Burrows 1949). These negative effects were the basis for the “push-pull” hypothesis of pituitary-gonadal interaction proposed by Moore and Price (1930, 1932). A positive, stimulative effect of gonadal hormones in promoting puberty was noted by Engle (1931), however, and several workers soon reported that the immediate effect of estrogen administration on luteinizing potency of the AP was stimulative (Fevold, Hisaw and Greep 1936; Lane and Hisaw 1934; Lipschütz 1935). More directly, Hohlweg and Chamorro (1937) demonstrated that luteinization could be induced in immature rats by administration of estradiol benzoate. In ewes the induction of ovulation by estrogen therapy was accomplished by Hammond et al. (1942).

Corpus Luteum Estrous Cycle Ovarian Cycle Estradiol Benzoate Progesterone Treatment
These keywords were added by machine and not by the authors. This process is experimental and the keywords may be updated as the learning algorithm improves.
This is a preview of subscription content, log in to check access.