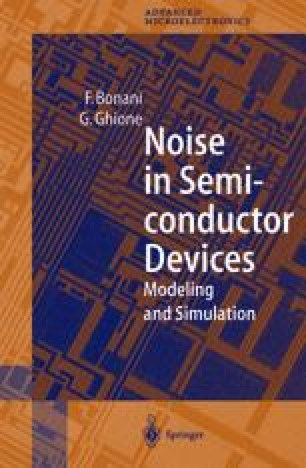 The operation of semiconductor devices is based on charge transport, i.e. on the motion of free carriers in the conduction and valence bands. Under the effect of applied external forces and of the interaction with lattice perturbations or other carriers, electrons and holes undergo a kind of Brownian motion whereby the velocity of each carrier exhibits large fluctuations, while their position slowly drifts according the direction of the applied field or of the concentration gradient. According to a semi-classical approximation, the state of each carrier is described by its trajectory in the phase space (r i (t), v i (t)). However, owing to the extremely large number of carriers participating in the motion,1 the individual behavior of each carrier is immaterial, and only average quantities (like the average position r and velocity v) are relevant and have an impact on the circuit variables. For instance, the current density (and therefore the total current) in an n-doped semiconductor is proportional to the average electron velocity.

Noise Source Semiconductor Device Noise Figure Correlation Spectrum Trap Level
These keywords were added by machine and not by the authors. This process is experimental and the keywords may be updated as the learning algorithm improves.
This is a preview of subscription content, log in to check access.