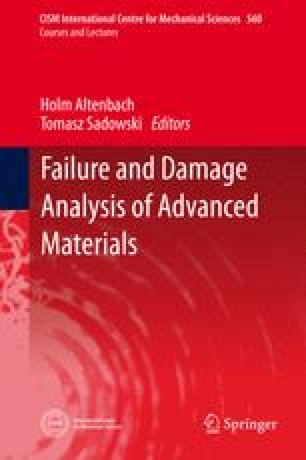 In material science or structural mechanics, failure is generally the loss of load carrying capacity of a material unit or structural element. This definition introduces the fact that failure can be examined in different scales (microscopic, mesoscopic, macroscopic). In addition, one has to distinguish among brittle, ductile, and intermediate material behavior. In structural mechanics, if the structural response is beyond the initiation of nonlinear material behavior, failure is related to the determination of the integrity of the structure.

In principle, failure criteria correspond to phenomenological material behavior modeling. They describe the occurrence of failure at different loading conditions. Although there are no physical principles on which failure criteria can be based on, there are still a lot of suggestions available in the literature. Similarly due to the lack of generally accepted failure criteria, the formulation is up to now under research.

The criteria based on the introduction of some empirical assumptions for critical values defined by the stress or strain state are denoted as the engineering one. In addition, characteristics of the stored strain energy or power can also be used. Based on some of these hypotheses and their consequences failure criteria will be discussed here.

Failure Criterion Material Behavior Equivalent Stress Transverse Isotropy Rank Tensor
These keywords were added by machine and not by the authors. This process is experimental and the keywords may be updated as the learning algorithm improves.
This is a preview of subscription content, log in to check access.