The Fluid Dynamics of Climate 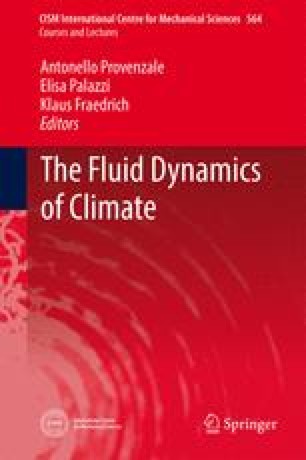 The dynamics of a set of zero- and one-dimensional Energy Balance Models (EBM) of the Earth’s climate are subjected to a systematic analysis of the response to changes of the greenhouse effect in terms of atmospheric opacity (effective emissivity), which is related to CO2 concentration. (i) Experiments with abrupt CO2-decrease (opacity increase) from the actual value are performed with the one-dimensional EBM, which reveal the following results: There is a critical opacity threshold beyond which the model ends up at a modern snowball Earth. It occurs within a few percentage changes around this threshold because the model strongly depends on the relationship among atmospheric temperature and the sudden ice-albedo feedback activation. Two different time scales characterize the temperature decline; the first almost linear part appears to be related to the change of the opacity and the corresponding sharp increase of the planetary albedo; the second part is mainly controlled by the rapid change of the planetary albedo towards its higher value (ice-albedo feedback). Return from snowball Earth requires a large CO2 concentration as only the ice-albedo feedback is effective while the water vapor feedback is ineffective at low temperatures. Introducing the ice margin as an EBM-variable, hemispheric asymmetry can be identified for different polar albedos while keeping the meridional heat transports. (ii) Experiments with transient opacity changes reveal three kinds of hysteresis cycles when introducing cyclic changes: static, dynamic and memory hysteresis. Hysteresis loops are attained for a cyclic change of the greenhouse forcing between the extreme conditions (near bifurcation points) of maximum (almost all outgoing infrared radiation is trapped by the atmosphere) and minimum greenhouse effect (when almost all the infrared radiation is emitted to space). Static hysteresis loops are attained for vanishing heat capacity while dynamic hysteresis shows delay due to the ocean’s heat capacity. For cyclic change far from bifurcation points, the model climate depends only on the history of the radiative forcing thus displaying a hysteresis cycle that is neither static nor dynamical (it does not include bifurcation points nor shows a cyclic steady state), but is related to the memory response of the model determined by the heat capacity (ocean mixed-layer depth).

Bifurcation Point Cyclic Change Climate Dynamics Dynamical Core Energy Balance Model
These keywords were added by machine and not by the authors. This process is experimental and the keywords may be updated as the learning algorithm improves.
This is a preview of subscription content, log in to check access.