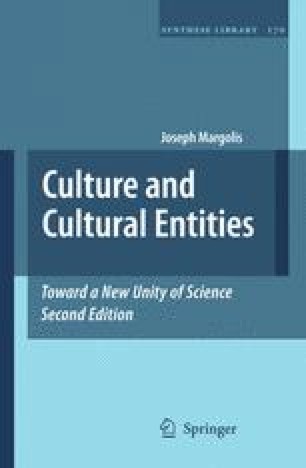 In speaking of the consciousness of animals, affection for one's own pets is bound to be received as a mark of dangerously reduced rigor. I am tempted to offer the sanguine anecdote of my dog's symbolic behavior - how he nuzzles me in a characteristic way, at a certain hour, in order to get me to take him out; how he touches my hand with his nose, starts for the stairs, waits for me to put on my jacket, trots to the door, pauses for me to follow, nudges his leash expectantly, moves to nuzzle me again, waits at the door, and so on. Some will see in this a grand self-deception; others, a genuinely instructive specimen; still others, a convenient façon de parler. There's little point in mere insistence: the obvious puzzle concerns how to address the question of animal consciousness, animal communication, animal thought, animal intelligence. But more than this, the validity of the evidence favorable to significant claims of animal competence below the level of genuine language itself entails a distinctive view of the empirical nature of the issues. It is not in the least unreasonable to resist the separation of apparent questions of fact and questions of why it is that we regard particular questions as empirical questions of fact. But the issues regarding animal consciousness lend a peculiar relevance to the conceptual linkage between these two sorts of question.

The initial constraints on inquiry are decisive. First of all, linguistic communication is initially - on a dubious reading, essentially - restricted in an infra-species way to human beings. There is no terrestrial inter-species linguistic communication involving natural languages (that is, languages learned naturally), even if there is evidence of primate competence in learning the rudiments of natural languages.1 Of course, given the biology of the primates, the admission that they are capable of learning human languages at once entails a very high level of animal consciousness and intelligence prior to such learning (the limits of which are obviously open to considerable dispute). But the very move to ascribe linguistic ability to the great apes, the possibility of inter-species linguistic communication (even nonhuman infraspecies linguistic communication - after the fact of such learning) depends on the theoretical import, both enabling and restricting, of the first constraint adduced. Very simply put, we do not have the slightest idea of any specific biological restrictions that might bar extending language use beyond the human. When, for instance, he insists that language is species-specific to humans, Chomsky trades on nothing more than the fact (if it is a fact) that only humans show even an incipient tendency toward language. Should the dolphins prove to have a natural language-like communicative system that could be strengthened in the direction of a human language, terrestrial inter-species communication among (naturally) languaged creatures may, as John Lilly has always dreamed,2 still obtain. Certainly, extra-terrestrial interspecies linguistic communication is not inconceivable; and, closer to home, the achievement of the human infant in mastering a language, naturally, is, in spite of the sometimes misleading complications of the Chomskyan theory of the innate features of human linguistic competence, evidence of (i) a remarkably powerful form of communication between prelinguistic animals and languaged human persons, and (ii) the learning of a language within the context of prelinguistic consciousness and intelligence. Correctly understood, that achievement signifies that the difference between animals and persons is not as such a difference between species — even if it is the case that, among terrestrial creatures, all but the human species are contingently precluded from developing into persons.3 In any case, we are not at this point claiming that any terrestrial creature other than man actually possesses a language. That issue is a vexed one, to which we shall return only very briefly, after considering what is involved in attributing a mind to animals in spite of a lack of language.

Natural Language Human Mind Human Language Propositional Content Linguistic Ability
These keywords were added by machine and not by the authors. This process is experimental and the keywords may be updated as the learning algorithm improves.
This is a preview of subscription content, log in to check access.