From Reasons to Norms 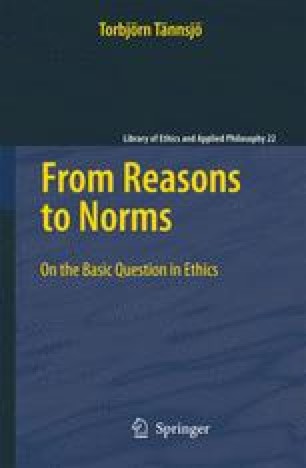 Reasons from Justice and Aesthetics

Two further putative sources of normativity need to be examined: theories of justice and aesthetics. Certainly, those who advocate various different theories of justice often speak as though they contemplated a special realm of norms to do with distribution of goods. And they make claims such as, if a perfectly equal distribution were exchanged for an unequal one, then, even if this would mean an improvement for each individual, the change would be worse in one respect, that is with respect to justice. So there is a kind of normative ‘pull’ in the direction of equality, even though, in the envisaged circumstances, the exchange of equality for inequality may be morally desirable. And within aesthetics normative considerations enter in two different ways. There are philosophers who claim that an attitude of admiration or disinterested satisfaction is what it would be proper to adopt, when contemplating valuable art. Immanuel Kant made this claim, and it has been followed up by G.E. Moore and others. I will discuss it in Chapter 9. Another claim has been that, if something is beautiful, if something possesses aesthetic value, then, all other things equal, we have an obligation to produce it. This is the idea that will be discussed in the present chapter. However, in order to be plausible, this view needs the assumption that there is such a thing as aesthetic value. It must be shown that there are objects, natural or artefacts, of a kind such that we ought to construct tokens of them or, once they exist, keep them in existence.

Basic Structure Moral Theory Human Race Moral Claim Normative Question
These keywords were added by machine and not by the authors. This process is experimental and the keywords may be updated as the learning algorithm improves.
This is a preview of subscription content, log in to check access.