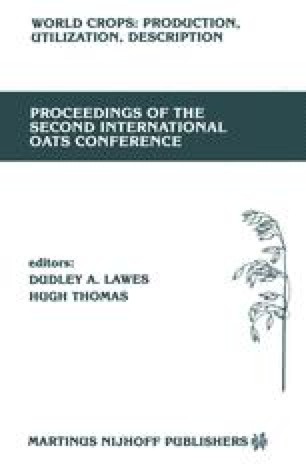 The Chemical Control of Wild Oats in Oats — A Progress Report

The increasing cultivation of cereals in Britain since the war has resulted in the emergence of several grasses as serious weeds, notably wild oats. Chemical industry has responded with the introduction of a number of herbicides to control this weed in wheat and barley but not, unfortunately, in cultivated oats. Chlorfenprop-methyl was possibly the exception for this chemical did show specificity within the genus Avena(l). Six oats were reported to show tolerance and its use as ‘Bidisin’ (Bayer) was consequently recommended in the late 1970s for the control of wild oats in specified spring oats. A second herbicide, barban (Carbyne) was also said to be tolerated by certain oat cultivars. Unfortunately, like chlorfenprop-methyl some biotypes of A.fatua were also less sensitive to barban(2), Both of these herbicides have now been largely superseded in Britain. Recently, however, marked differences in the sensitivities of cultivated oats to a third herbicide, diclofop-methyl, (Hoegrass, Hoechst) have been recognised independently by two groups of research workers(3).

Biochemical Conversion Show Specificity Seed Dressing Recommend Field Rate Locatedat Specific Site
These keywords were added by machine and not by the authors. This process is experimental and the keywords may be updated as the learning algorithm improves.
This is a preview of subscription content, log in to check access.