Biogeography and Ecology in the Canary Islands 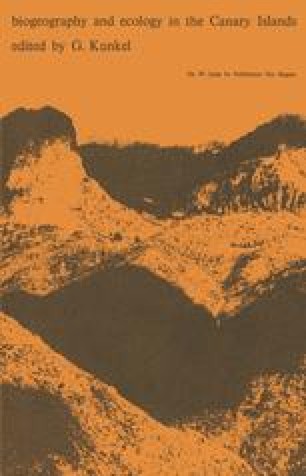 The Laurisilva of Hierro

The character of the flora of these Islands is defined and determined by old indigenous genera and species like Aeonium species, Apollonias, Visnea mocanera, Forskohlea angustifolia, Paronychia canariensis, Persea indica, Pleiomeris canadensis, Ixanthus viscosus, Ceropegia fusca, Echium spec. div., Sideritis spec. div., Gonospermum canariense, Sonchus species,. Its a consequence of the seclusion of the islands are absent competitors, and the genera have produced many species from trees to annual species and subspecies. That is also the reason for the immigration and the propagation of species like Erigeron karwinskianus, Oxalis pes-caprae, Calendula arvensis. The apportioning to the vegetation belts is not always convincing if we have few species as in the high mountains, the zone of the two alpine belts. The subalpine Pinus belt is present with the Pinus canariensis and its flora. The subtropical Genisteae-Ericoideae belt is represented by the Myrica-faya-Erica arborea zone (Fayal-Brezal). The best represented belt is the Laurisilva, the Lauraceae belt. Below are mixed parts of the xeric Quercus-Ilex belt with Juniperus phoenicea and Stipa capensis and species of the Argania sideroxylon vegetation of Morocco.

Canary Island Trifolium Subterraneum Raphanus Raphanistrum Ecological Form Juniperus Phoenicea
These keywords were added by machine and not by the authors. This process is experimental and the keywords may be updated as the learning algorithm improves.
This is a preview of subscription content, log in to check access.