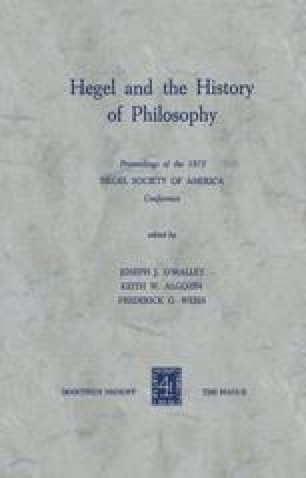 Hegel and the History of Philosophy pp 83-94 | Cite as

In the Meditations, we find Descartes struggling to establish the true and real existence of self, God and world by a systematic application of doubt to the objects of experience. However “ingenuous” and “naive” the narration of his thoughts may have seemed to Hegel, Descartes’ work is nonetheless given a place of prime importance in the Lectures on the History of Philosophy. “With him,” Hegel remarks, “the new epoch in Philosophy begins,” the Cogito, the first step in the grounding of all truth in self-thinking thought, being “the maxim on which may be said to hinge the whole interest of Modern Philosophy.”1 While Hegel’s construal of Descartes and its importance for subsequent thought deserves comprehensive treatment, in this paper I propose simply to take an Hegelian look at some aspects of Descartes’ struggle in order to clarify certain problems common to them both, and to all serious philosophy.

Phenomenal Character Double Negation Modern Philosophy Partial Truth Mere Appearance
These keywords were added by machine and not by the authors. This process is experimental and the keywords may be updated as the learning algorithm improves.

“There lives more faith in honest doubt, Believe me, than in half the creeds.” Tennyson