An International Comparison of Workers’ Compensation 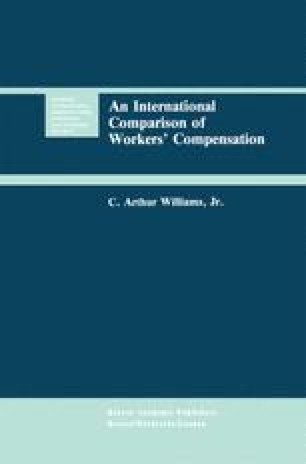 An International Comparison of Workers’ Compensation pp 31-56 | Cite as

Two sets of standards have been developed for evaluating workers’ compensation programs. The first, which is the more relevant for international comparisons, is Convention 121 (Convention Concerning Benefits in the Case of Employment Injury) adopted in 1964 by the General Conference of the International Labor Organization. The second set was proposed in the United States in 1972 by the National Commission on State Workmen’s Compensation Laws. Although directed toward state programs in that nation, the Commission’s recommendations are also relevant because they were based on 60 years of experience, at first with programs in only a few jurisdictions but, since 1948, with diversified programs in all 50 states plus the District of Columbia and two federal programs—one covering federal government employees and the other covering longshore and harbor workers.

International Labor Organization National Commission Occupational Disease Disability Benefit Wage Loss
These keywords were added by machine and not by the authors. This process is experimental and the keywords may be updated as the learning algorithm improves.
This is a preview of subscription content, log in to check access.