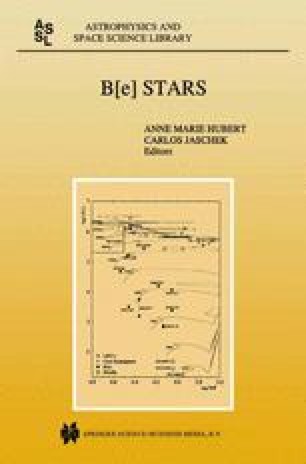 Absolute Magnitudes for some B[e] Stars from Hipparcos

Before the measurements of the Hipparcos satellite, only the parallaxes of very few B stars were measured: B stars, which are intrinsically bright, are scarce in the solar neighbourhood and the great majority of them are out of range of ground-based parallax measurements. The parallaxes of Be stars were only determined by indirect methods. However, because their absolute magnitude is a clue for the understanding of the Be phenomenon which is up to now very badly explained, numerous studies were devoted to the determination of this parameter, since Merrill (1933). Extensive references can be found in Zorec and Briot (1991). At it will be seen below, because of the measurements of the parallaxes for large samples of B and Be stars, the results of Hipparcos bring new insight on the absolute magnitudes of Be stars as compared with the absolute magnitude of B stars. A preliminary study was already published in Briot et al. (1997).