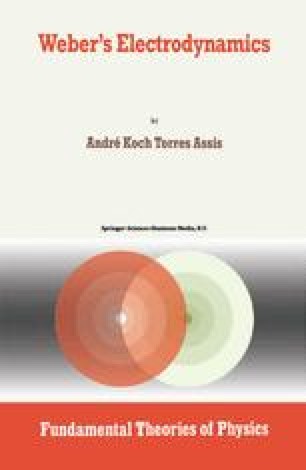 Forces of Weber and of Lorentz

As we saw in the previous Chapters, Weber’s law follows all the principles of conservation of classical physics: linear momentum, angular momentum and energy. With Weber’s force we derived Ampère’s force between current elements. Lastly we showed how to derive from Weber’s law the set of Maxwell’s equations (Gauss’s law, the magnetic circuital law, the law for the absence of magnetic monopoles, and Faraday’s induction law). In particular, to derive the magnetic circuital law it was necessary, besides Weber’s force, to introduce the continuity equation for electric charges in order to obtain Maxwell’s displacement current. The converse was shown in Section 2.5, namely, from the law of Gauss and the magnetic circuital law, with displacement current, it is possible to derive the equation of continuity. The important aspect to be emphasized here is that Weber’s force is compatible with Maxwell’s equations. Later on we will discuss the limitations of this derivation of Maxwell’s equations from Weber’s electrodynamics.

Inertial Frame Uniform Magnetic Field Test Charge Retarded Time Poloidal Magnetic Field
These keywords were added by machine and not by the authors. This process is experimental and the keywords may be updated as the learning algorithm improves.
This is a preview of subscription content, log in to check access.

Cite this chapter as:
Assis A.K.T. (1994) Forces of Weber and of Lorentz. In: Weber’s Electrodynamics. Fundamental Theories of Physics, vol 66. Springer, Dordrecht