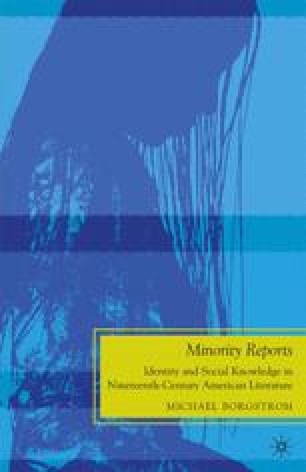 Frederick Douglass and the Limits of Knowledge

The process of epistemic identification (both its promises and its challenges) finds perhaps its most poignant expression in the genre of the slave narrative. Unlike other literary forms, such as the novel, the slave narrative faces a discrete set of predetermined expectations in relation to both authorial identity and narrative intent. Readers know these texts, fundamentally, in two related ways: as black-authored accounts that trace a literal and psychological escape from slavery; and as strategically political tools to recruit sympathetic white readers to the abolitionist cause. Accordingly, the genre is structured by a series of assumptions concerning author and audience. How these texts are written is directly linked to how (and by whom) they are read. Purpose determines their composition; audience dictates their content.

Personal Identity Racial Identity Authorial Identity African American Culture Epistemic Perspective
These keywords were added by machine and not by the authors. This process is experimental and the keywords may be updated as the learning algorithm improves.
This is a preview of subscription content, log in to check access.