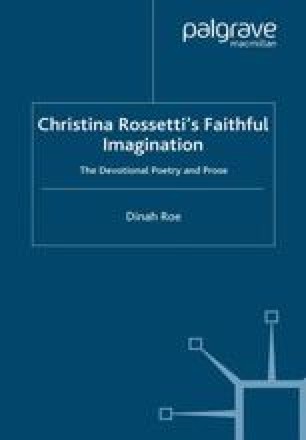 The self-imposed silence of Monna Innominata’s speaker seems to have had the opposite effect on Rossetti. Its publication in A Pageant and Other Poems ushered in a productive period which saw the release of three devotional prose works in five years: Called to be Saints, Letter and Spirit and Time Flies. There is little evidence here of a ‘heart pent up, forlorn’, but rather an intellect at play. Germaine Greer, not an admirer of Rossetti’s devotional work, accuses her of ‘profound and perverse self-absorption’ that caused her ‘to waste her life’, adding that ‘Her assiduity in frittering her time away was unrelenting’.1 But Rossetti’s publishing record is a strong counterargument. Despite frequent periods of convalencence, Rossetti, like Wordsworth, lived and worked beyond all expectations. ‘Frittering her time away’ was anathema to Rossetti, both professionally and spiritually. In fact, the use and abuse of time is one of the leading concerns of her penultimate devotional prose work, Time Flies: A Reading Diary.

Prose Passage Lower Place Anxious Thought Christian Writer Good Poem
These keywords were added by machine and not by the authors. This process is experimental and the keywords may be updated as the learning algorithm improves.
This is a preview of subscription content, log in to check access.