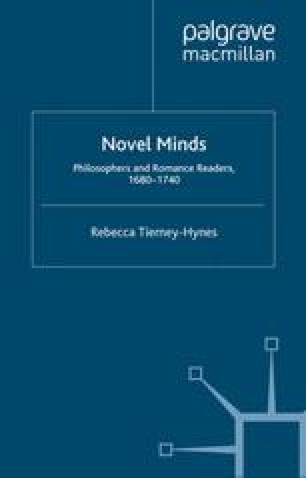 Introduction: From Passions to Language

This passage from the preface to William Congreve’s 1692 novella, Incognita, was very often used about 30 years ago to talk about an incipient distinction between novel and romance.2 After Michael McKeon’s magisterial Origins of the English Novel, we tend to understand it instead as exemplary of what McKeon explains as the dialectical relationship of romance and the novel.3 But in fact Congreve’s story about reading tells us far less about how we might identify and distinguish these amorphous genres than it does about what people in the late seventeenth century thought about what happens to us when we read.4 Romance, according to Congreve, ‘elevate[s] and surprise[s] the Reader’ and then brings him down to earth with a thud. Comedy and the novel have neither the same high, nor the same hangover. In other words, these are both less extreme and less absorbing genres. Despite the fact that the novel ‘Come[s] near us’, it still allows us critical distance. We can be ‘warn’d’ and ‘made asham’d’ by comedy’s depiction of vice, Congreve says elsewhere, because we can also reflect while we experience it.5 It is this reflective capacity, this critical distance, that Congreve is attempting to assign to the novel by comparing it with comedy. In contrast, the ‘lofty Language’ and the ‘impossible Performances’ of romance seem to prevent reflection and ‘transport[]’ the reader out of familiarity and into ‘wonder’.

Eighteenth Century Literary Practice Figurative Language Early Eighteenth Century Automatic Imitation
These keywords were added by machine and not by the authors. This process is experimental and the keywords may be updated as the learning algorithm improves.

Romances are generally composed of the Constant Loves and invincible Courages of Hero’s, Heroins, Kings and Queens, Mortals of the first Rank, and so forth; where lofty Language, miraculous Contingencies and impossible Performances, elevate and surprise the Reader into a giddy Delight, which leaves him flat upon the Ground whenever he gives of, and vexes him to think how he has suffer’d himself to be pleased and transported, concernd and afflicted at the several Passages which he has Read, viz. these Knights Success to their Damosels Misfortunes, and such like, when he is forced to be very well convinced that ‘tis all a lye. Novels are of a more familiar nature; Come near us, and represent to us Intrigues in practice, delight us with accidents and odd Events, but not such as are wholly unusual or unpresidented, such which not being so distant from our Belief bring also the pleasure nearer us. Romances give more of wonder, Novels more Delight. And with reverence be it spoken, and the Parallel kept at due distance, there is something of equality in the Proportion which they bear in reference to one another, with that between Comedy and Tragedy.1