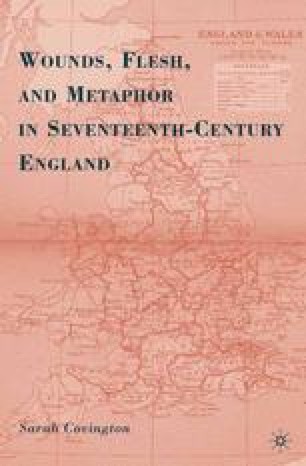 Wounds, Flesh, And Metaphor In Seventeenth-Century England pp 175-179 | Cite as

Seventeenth-century writers, including the least poetic of them, inhabited a world of metaphor even if they could overindulge in its usage. But they also understood, as James Wood has written, the “independent, generative life that comes from likening something to something else.” Metaphor in its transformative capacities reflects and explains, yet it also “changes thought,” and in England’s case, even action at times.1 To speak insistently of “bloody” and “wounding” traitors or enemies, no matter how ubiquitously, is an implicit call to action, since wounds and blood must be answered for a body’s own reconstitution. The fact that the Bible often sanctioned blood for blood also legitimated a struggle that carried larger and more providential implications; unique to the seventeenth century, however, were the competing accusations of who caused the blood, with even the king himself ultimately killed for his own part in the shedding. The fact that the metaphor was claimed by so many in the ideological (or psychological, religious, legal, and military) struggles only testified to how powerful and capacious that metaphor was in accommodating the different discourses of a turbulent age, even if it served as an incendiary image as much as it could also console in its explanatory power.

Seventeenth Century Transformative Capacity Ideological Goal Medieval Cult Popish Plot
These keywords were added by machine and not by the authors. This process is experimental and the keywords may be updated as the learning algorithm improves.
This is a preview of subscription content, log in to check access.