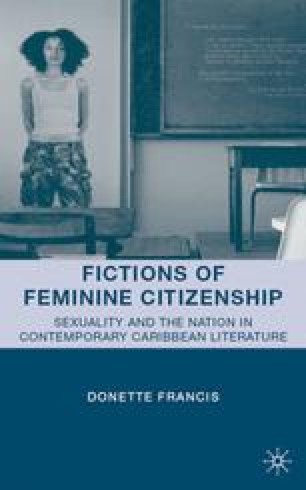 In the late-nineteenth century, from July 8 through September 9 of 1899, The Jamaica Times published a serialized story, “The Mandarin’s Daughter: A Romance of Chinese Life,” by Wong Chin. The week preceding its first installation, the newspaper promotes the story as being “both entertaining and instructive and will give you keener insight into the character of a people about who so little is known than can be obtained from reading volumes of history.”1 This prefatory editorial announcement makes two claims central to the current project: one, it suggests nineteenth-century Jamaicans are not familiar with this ethnic group but have a curiosity that we might surmise stems from the recent influx of Chinese indentured laborers to their own island. Second, it makes a claim for literature’s supplemental engagement with history.

White Woman Sexual Violence Chinese Woman Sexed Body Nonwhite Woman
These keywords were added by machine and not by the authors. This process is experimental and the keywords may be updated as the learning algorithm improves.

In landscape architecture desire lines is used to describe unofficial paths, those marks left on the ground that show everyday comings and goings, where people deviate from the paths they are supposed to follow.