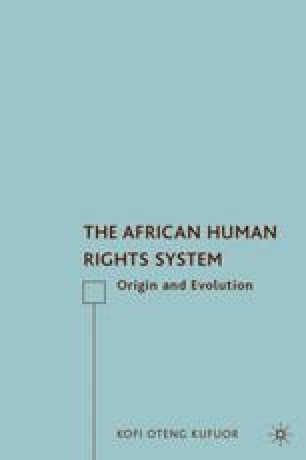 The Origin of the African Human Rights System

Why did the members of the OAU, a collective with a dismal human rights record, and also so jealous of their state sovereignty, decide to draft and adopt the African Charter and so lay the grounds for the development of the African human rights system? This decision is puzzling given the view in Africa at the time that human rights, especially civil and political rights, were viewed by some political leaders as a “western construct with limited applicability.”1 The general consensus among postcolonial African leaders at the time was that the enjoyment of civil and political liberties would slow down economic development or, in the extreme, fuel political and social strife. Thus we must ask whether the decision to adopt the Charter was the result ofa cognitive shift within the OAU away from the authoritarian political systems that they had deliberately constructed, toward more liberal democratic systems, or if the Charter can be construed as the outcome of collective rational calculation by a group of states seeking to survive challenges to their rule? Another question is whether the African Charter is a strategic move to lock-in democracy and liberalism while it places the dismantling of this construct beyond the reach of future authoritarian rulers who could emerge at the national level?

Public Choice Foreign Policy African State African Government State Sovereignty
These keywords were added by machine and not by the authors. This process is experimental and the keywords may be updated as the learning algorithm improves.
This is a preview of subscription content, log in to check access.