Women Educators in the Progressive Era 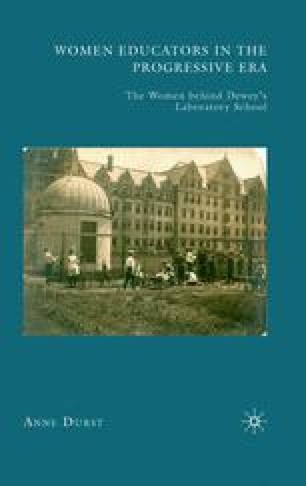 Women Educators in the Progressive Era pp 9-24 | Cite as

John Dewey and the Beginnings of the Laboratory School

In 1896, John Dewey started an experimental school at the University of Chicago to test ideas and teach children. He was aware from the beginning that this public act would call for abilities that he thought important, but had not yet mastered. During the Laboratory School’s early years, the philosopher wrote that “the kind of studies I have pursued, and my natural bent of mind have tended to give me a habit of isolation in work.” These interests and tendencies, he felt, had caused him “serious difficulty … in getting into cooperative relations with people—my theories to the contrary notwithstanding.”1 Yet in spite of his inclination to solitude, Dewey sought out such cooperative relations in deliberately created communities dedicated to change, experimentation, and social reform.2 His ground-breaking philosophical work on pragmatism was brought to life in the Laboratory School, where Dewey and others created a “community of inquiry” in which, as one teacher wrote, they “were all on a piece of research together.”3 Dewey figured centrally in other such collective ventures at the turn of the century, including his friend Jane Addams’s Chicago settlement house, Hull House, and philosopher Thomas Davidson’s Glenmore Summer School for the Culture Sciences in New York’s Adirondack Mountains.4

Experimental School Summer School Chicago School Philosophical Idea Laboratory School
These keywords were added by machine and not by the authors. This process is experimental and the keywords may be updated as the learning algorithm improves.
This is a preview of subscription content, log in to check access.