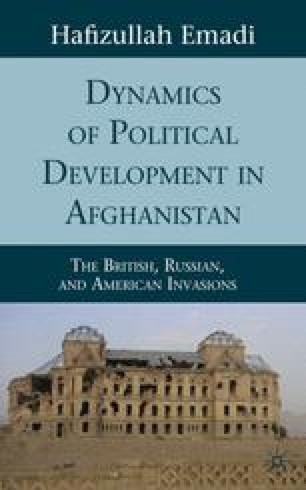 Dynamics of Political Development in Afghanistan pp 1-10 | Cite as

Afghanistan is a country with diverse geography, people, civilizations, and political history that gained international attention with the Soviet invasion of the country in December 1979. It then faded from the spotlight after the Soviet troop withdrawal. It recaptured international attention after supporters of the Islamic fundamentalist organization, Al-Qaeda, who were sheltered and supported by the Taliban, attacked the World Trade Center buildings in New York and the Pentagon on September 11, 2001, using commercial airliners as weapons of mass destruction. Afghanistan became a pariah state and writers, scholars, and the Western media depicted Afghanistan as a safe haven for terrorists associated with Islamic fundamentalists. These one-dimensional views and analyses provided a distorted picture of the country, its people, and its history. Islamic fundamentalists are not representative of the country and its people.

Political Development Imperial Power Armed Struggle Islamic Fundamentalist Soviet Occupation
These keywords were added by machine and not by the authors. This process is experimental and the keywords may be updated as the learning algorithm improves.
This is a preview of subscription content, log in to check access.