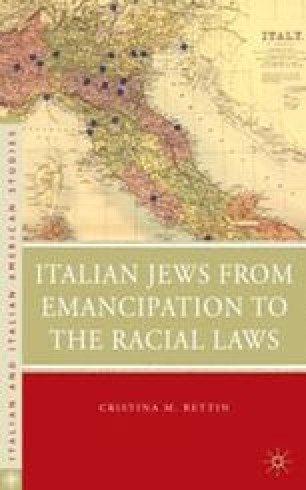 As we have seen, the end of the nineteenth century saw the establishment in Italy of numerous Jewish newspapers, Jewish youth movements, and Jewish cultural societies whose aim was to encourage the rebirth of Judaism and define its essence. The first cultural society, Pro Cultura, was established in Florence in 1907, shortly after a conference held in Florence on the significance of Jewish culture. The conference emphasized the Jewish approach that viewed faith and science, religion and culture as intimately related, to the extent that these phenomena were regarded as a homogeneous unit. Discussions during the conference focused on the study of Jewish eclecticism, and the Pro Cultura society intended to put this program of study into practice. The members of the society were all Florentine Jews, among them Umberto Cassuto, Angelo Sacerdoti, David Prato, and Gustavo Castelbolognesi. These young men had all been students at the Rabbinical College of Florence, directed by Shemuel Zvi Margulies, where they studied the history and literature of Israel according to a specific scientific viewpoint that led to critical analyses conducted within a modern context.

Jewish Community Jewish Life Jewish History Jewish Culture Jewish Student
These keywords were added by machine and not by the authors. This process is experimental and the keywords may be updated as the learning algorithm improves.
This is a preview of subscription content, log in to check access.