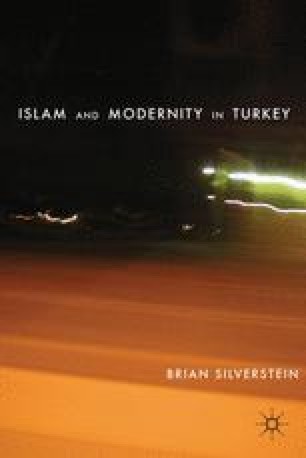 A few minutes have passed since the ezan (from the Arabic adhan) sounded from the loudspeakers on minarets in the mosques of the Fatih neighborhood of Istanbul as worshippers make their way to ‘asr (afternoon) prayers and the following sohbet on this, like most other, Sunday afternoons.1 They come to the Iskender Pasha mosque’s courtyard gate, down the steps, to the ablution fountain.2 Friends and acquaintances nod and smile to one another, rolling down their sleeves as they rise from the stools by the ablutions fountains. Inside they perform the canonical worship then break ranks for recommended sunna prayers and brief individual zikrs. After prayers, about half of the male worshippers gather in the main part of the mosque under the dome to listen to the week’s sohbet. Women tend to perform their prayers and listen either in the balcony overlooking the mosque’s main room or in an activity room downstairs in the basement, to which loudspeakers have been wired, and from which there is more coming and going, and children.3 The imam who led the prayers, we’ll call him Murad hoja, often acts as a deputy (vekil) for Esad hoja, who was abroad—mainly in Australia—beginning in 1997. Murad hoja shakes hands with and greets friends who had previously been standing in the prominent positions around and just behind him for prayers, while a young assistant turns on the light above the pulpit raised in the front-left corner of the room.

Ethical Practice Disciplinary Practice Structure Disposition Moral Disposition Islamic Tradition
These keywords were added by machine and not by the authors. This process is experimental and the keywords may be updated as the learning algorithm improves.
This is a preview of subscription content, log in to check access.