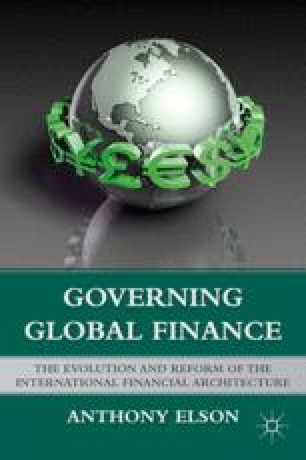 The emergence of the global financial crisis in 2008–9 was clear evidence of a system failure of the IFA in terms of crisis prevention. Although some policy analysts and institutions were raising concerns about the build-up of risk within the “shadow” banking system and the sustainability of global imbalances, most policy makers in the advanced countries were not prepared for the severity and swiftness of the events that transpired in the final quarter of 2008. Why then was the IFA unable to prevent the outbreak of crisis, given its responsibility for maintaining global financial stability? Once the crisis erupted, how has the IFA responded in terms of crisis management? These are the major questions that this chapter attempts to address.

Central Bank Advanced Country Emerge Market Economy International Monetary System Recent Crisis
These keywords were added by machine and not by the authors. This process is experimental and the keywords may be updated as the learning algorithm improves.
This is a preview of subscription content, log in to check access.