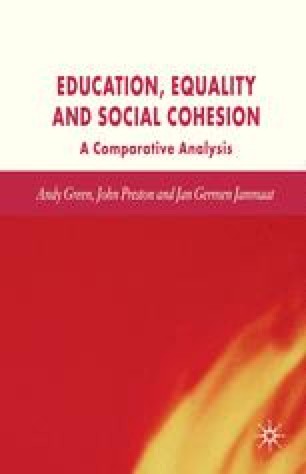 In the previous chapter we examined the relationship between educational inequality and social cohesion in a cross-sectional analysis. That is, we took a single time period and examined the correlations between educational inequality, income inequality and several measures of social cohesion. Although we found some evidence that educational inequality correlates with measures of social cohesion in this time period, ideally we would want to know whether these relationships hold over extended periods of time. This will allow us a more robust test of whether there are causal relationships at work. In this chapter we move beyond this single snapshot of relationships by modelling changes in educational and income inequality and a number of social cohesion outcomes over time. In practice, we take a series of snapshots for a number of countries and combine them together to give the illusion of time, rather like the individual cells in a film when run together give the illusion of movement. The repeated cross-sections which we take (for 1960, for 1965 and so on) for the same countries over time give us a cross-sectional time series dataset which can then be analysed to examine whether the indicative evidence for the mid-1990s in chapter 1 was coincidental, or whether there might be a relationship which holds for a group of countries throughout a number of decades.

Social Capital Income Inequality Social Cohesion Gini Coefficient Civil Liberty
These keywords were added by machine and not by the authors. This process is experimental and the keywords may be updated as the learning algorithm improves.
This is a preview of subscription content, log in to check access.