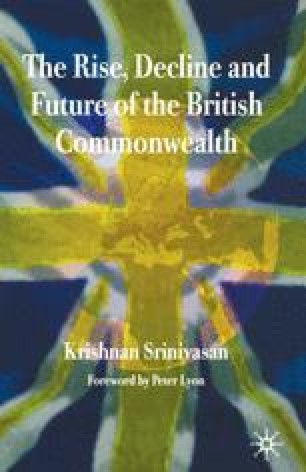 The Rise, Decline and Future of the British Commonwealth pp 1-4 | Cite as

The modern post-Second World War Commonwealth was designed by the British political leadership to comfort those in Britain who keenly felt the loss of Empire, and to provide a surrogate for colonial rule: an instrument to replace the Empire with a British sphere of influence covering a quarter of the world’s surface. The legacy at least in terms of nomenclature is enduring. The Commonwealth ceased to be ‘the British Commonwealth’ with the incorporation after the Second World War of sovereign, independent states that were members of the United Nations, and even more so with the establishment in 1965 of a multilateral Secretariat. But the organization continued to have a pronounced British stamp, Britain was the adhesive that held the membership together, and ‘the British Commonwealth’ became the customary appellation by which the body was known to people in countries outside the Commonwealth, and to many within it as well.

Colonial Rule British People Commonwealth Periodical Macmillan Publisher White Dominion
These keywords were added by machine and not by the authors. This process is experimental and the keywords may be updated as the learning algorithm improves.
This is a preview of subscription content, log in to check access.