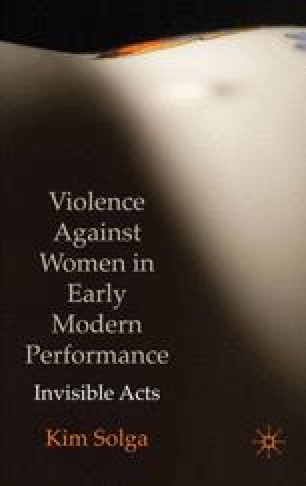 In the climactic scene of Richard Eyre’s 2004 film, Stage Beauty, Maria (Claire Danes) plays Desdemona to Ned Kynaston’s blacked-up Othello (Billy Crudup). Kynaston was formerly the most famous Desdemona on the Restoration stage, and Maria was his dresser; now she is the new ‘it’girl, and Ned is out of work and out of favour. Perhaps for love, perhaps for money, Ned agrees to coach Maria’s Desdemona and to take the part of Othello in a performance of the play that represents continued professional survival for them both; at the end of this performance, however, the tensions bisecting Ned’s motives boil over. In a scene the DVD titles ‘Method Acting’, Danes and Crudup deliver pitch-perfect psychological realism that veers off course as Ned’s rage toward Maria overtakes his actor’s instincts. He throws her around, roughly forces her onto the bed, and finally smothers her with shocking brutality. On the scene’s flip side, between her urge to act well and her genuine terror Maria’s performance begins to tip over the footlights and into the Real. ‘Help! [ … ] He’s killing me!’, she cries desperately between lines of text, between pre-rehearsed actions; audience members grow increasingly edgy, stirring in their seats, but nobody makes a move to interrupt. Finally, Crudup drops the pillow; he stumbles away into a corner while Danes remains on her back, apparently suffocated. The camera pans to his face – confusion and terror – and then to the faces of distinct spectators: Tom Wilkinson’s Betterton, Hugh Bonneville’s Samuel Pepys, Zoe Tapper’s Nell Gwynn, and Rupert Everett’s King Charles II. Everyone is frightened; no one knows what to do.

Collective Refusal Audience Member Feminist Performance Restoration Stage Ordinary Investment
These keywords were added by machine and not by the authors. This process is experimental and the keywords may be updated as the learning algorithm improves.
This is a preview of subscription content, log in to check access.