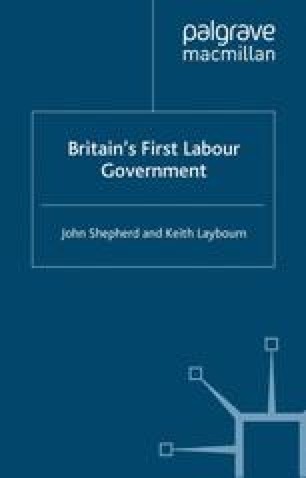 In December 1923 Lord Haldane — the former Liberal Imperialist soon to be Labour Lord Chancellor — wrote to his 99-year-old mother at his home in Scotland. ‘The City is in a panic at the thought of a Labour Government and is cursing Baldwin for bringing in this election. All the old ladies are writing to their brokers beseeching them to save their capital from confiscation,’ Haldane told her in his daily letter. ‘I have had a message from Baldwin begging me to join the Labour Government and help them out,’ he added.1 His former Liberal Party leader agreed. ‘You would be amused if you saw the contents of my daily post-bag: appeals, threats, prayers from all parts, and from all sorts and conditions of men, women and lunatics, to step in and save the country from the horrors of Socialism and Confiscation,’ Asquith noted — after an election that left the Liberals as the third parliamentary party at Westminster. In defeat, he reassured himself it was still possible to journey from Land’s End to Oxfordshire without crossing any Tory or Labour constituencies.2

Prime Minister Labour Government Labour Party Minority Government Party Secretary
These keywords were added by machine and not by the authors. This process is experimental and the keywords may be updated as the learning algorithm improves.
This is a preview of subscription content, log in to check access.