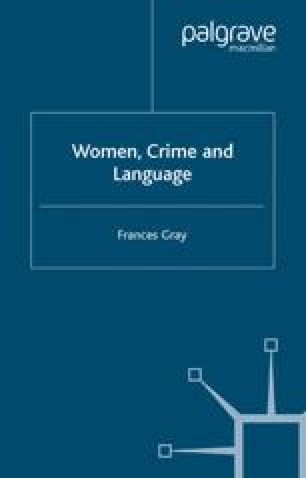 Virginia Woolf sees a young sailor with his girl, his friends, a cottage with flowers, and imagines for herself a picture called ‘The Sailor’s Homecoming’. As she reflects on it other images arise spontaneously, scenes of the sailor drinking tea, opening gifts. Later she hears a woman cry in the night. ‘It had been merely a voice. No picture of any kind came to interpret it.…But as the dark arose at last all one saw was an obscure human form, almost without shape, raising a gigantic arm in vain against some overwhelming iniquity’ (1942: 16). The pictures function for her as opposites, the cheerful image exorcising the horror evoked by the cry in the night. In the morning, she encounters another potent ‘picture’, a gravedigger whose wife is bringing tea. As lumps of clay mingle with the teacups, she learns that the grave is that of the sailor, the cry that of his wife.

Potential Victim Paranoid Schizophrenia Serial Killer Language Ideology Male Violence
These keywords were added by machine and not by the authors. This process is experimental and the keywords may be updated as the learning algorithm improves.
This is a preview of subscription content, log in to check access.