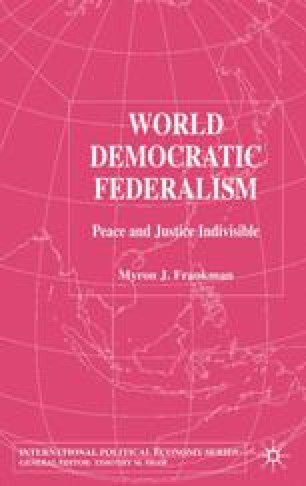 The next step in the reconstruction of our mental map of world order is that of considering the creation of a system of world public finance. The focus of world public finance would be to raise revenue to pay for the operations of the global public sector, including their activities in support of global public purposes, that is, those activities that are deemed to have global impact and which are not amenable to the actions of states, either acting alone or in groups. Included in these public purposes would be development financing, efforts on behalf of greater global equity, and the provision of global public goods. Each of these functions tends to be a subject of separate sets of discourse with limited overlap. I contend that the time has clearly come to talk about both world government and world public finance and to talk about both in terms that the urgency of our multiple, interconnected global crises requires, rather than the present financially and organizationally minimalist approach which often separates one need from another and then labors to earmark specific, often voluntary, revenues for unique purposes such as preventing the spread of AIDS. Our present problem-focused approach sometimes involves the creation of a new unit or a new international institution for a designated objective. Commonly the total resources—financial, human, and institutional—will not be increased but rather diverted from previous uses, as when foreign-aid funds were redirected after the fall of the Berlin Wall to the countries of Eastern Europe and the former Soviet Union from those in the global South.

Public Good Gross Domestic Product Gini Coefficient Gross National Product Income Redistribution
These keywords were added by machine and not by the authors. This process is experimental and the keywords may be updated as the learning algorithm improves.

It is neither necessary nor desirable that national boundaries should mark sharp differences in standards of living, that membership of a national group should entitle to a share in a cake altogether different from that in which members of other groups share.

—Friedrich A. Hayek, The Road to Serfdom